Translated by A. S. Kline

A Complete English Translation of the Memoirs, with a hyper-linked in-depth index and
selected illustrations of the people, places and events of Chateaubriand's life. 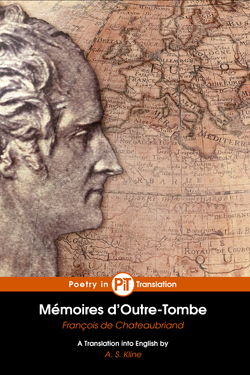 I shall go to him, but he shall not return to me.

Book IX With the Army of the Princes 1792

Book XVI The Execution of the Duc d’Enghien 1804

Book XXXIII A Farewell to Office 1830

Chateaubriand’s Mémoires d’outre-tombe, his Memoirs from Beyond the Grave, is at once sublime literature, brilliant history seen by a fiercely intelligent eye-witness, and a self-portrait of a remarkable and complex man. Chateaubriand is one of that worldly, intellectually-restless literary set, including Goethe and Byron, who may be said to have founded and developed the wider European Romantic movement, granting it social relevance and gaining it an extensive European and North American audience.

Chateaubriand’s long life saw him take on the roles of soldier, traveller, literary giant, politician and diplomat. But it is the humane, charming, fallible, private individual who endears himself to the reader in these pages. His many loves and friendships, his admiration for the brilliant women he knew, his warm interpretation of religion, and his conciliatory politics, all add to the vision of a great human being, in the French humanist tradition of Montaigne.

Living through the French Revolution, the Napoleonic Empire, the Bourbon Restoration, and the subsequent July Monarchy, dying during the Revolution of 1848, he was witness to an endlessly dramatic and fiercely contested period of history. His interpretation of that history is as a man of faith and a staunch proponent of constitutional Monarchy, yet with visible Republican sympathies and, for his time, a remarkable lack of bigotry. His autobiography here is a valuable corrective to a dogmatic view of that history often propounded by pro-Republican or pro-Napoleonic writings.

His travels in North America, Europe and the Middle-East also qualify him as the first intellectual ‘tourist’, and his narrative allows him to demonstrate his wide interest in nature, scenery, the arts, and humanity. The length and resonant complexity of the Memoirs allows us to enter fully into his world, and his literary legacy can be detected in writers such as Baudelaire and Proust, where his feeling for life’s transience, the profound echoes of time past, and the moral dimensions of human existence are further developed and extended.

Once encountered Chateaubriand is unforgettable, and the Memoirs deserve much wider literary and historical recognition. They have suffered from an unmerited neglect, due to their extent, and the previous lack of a complete English translation, a lack which is here remedied, the work being further enriched by over six hundred illustrations, and a fully detailed index.

Illustrations have been sourced from the public domain collections of various galleries and books considered public domain in the US due to pre-1923 publication dates. Digital scans of the latter have been released into the public domain by a variety of institutions through the Flickr Commons portal. Identifications and attributions are provided beneath each image. Referenced page numbers refer to positions in the scanned copies of the works, rather than actual page numbers, to facilitate retrieval of source files by interested readers.