The T’ang Dynasty and The Tao 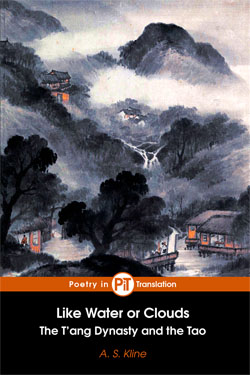 The T'ang Dynasty and the Tao

Index of poems by first line

Index of poems by title

Classical Chinese culture was inextricably linked to the three distinct but complementary approaches to life and thought enshrined in Taoism, Buddhism and Confucianism. Though each later developed the rituals and trappings of a religion, all three began as exemplary ways of living in a world without personal deity. The three greatest Chinese Classical poets, Li Po (Li Bai), Wang Wei, and Tu Fu (Du Fu) lived under the T’ang dynasty during the 8th century AD, and each aligns with one of the three ways of life. Li Po exemplifies Taoist spontaneity and vivacity, Wang Wei was attuned to the Buddhist apprehension of impermanence and the need to eliminate undue clinging to being, while Tu Fu followed Confucius in his engagement with society, his sense of responsibility, and his humanistic tendency.

‘Like Water or Clouds’ presents a brief history of the T’ang dynasty, interwoven with biographies of the three poets, new translations of many of their major poems, and an explanation and discussion of the three ways of life. The indebtedness of all three poets to the view of the natural world represented by Taoism, China’s indigenous mode and most pervasive cultural expression, is a constant theme, one most beautifully captured in the wealth of painting of natural subjects during the T’ang and later dynasties.

The present work is offered not merely as a description of Classical China’s greatest poetic age, and the profound contemplation of life found there, but as an initial approach for the modern reader to ways of thought which continue to provide inspiration as to how we might live and approach life in a scientific age, and in an intentionless universe.

There is a problem for the reader of texts about China and the Chinese, or of Chinese poems in translation, due to the variation in spelling of Chinese names and terms. This is caused by the many systems of transliteration used in the past when rendering Chinese names into English. It may make it difficult for the reader who knows no Chinese to recognise the same person place or term in different guises.

Modern China uses the Pinyin system (e.g. Beijing for Peking) for Romanization of names, which is still unfamiliar and awkward for most readers in the West who are used to the older systems.

I have therefore used traditional spellings in this text so that readers can recognise the names when referring to the many translations of Chinese poetry that already exist in English, and to older historical and biographical texts.

However readers wanting to refer to modern Atlases of China, for place names, or to other modern texts, will find a comprehensive list of equivalent names and terms towards the end of the text. This includes a Pinyin spelling for each name or term and for place-names the modern province name to assist when referring to an Atlas.