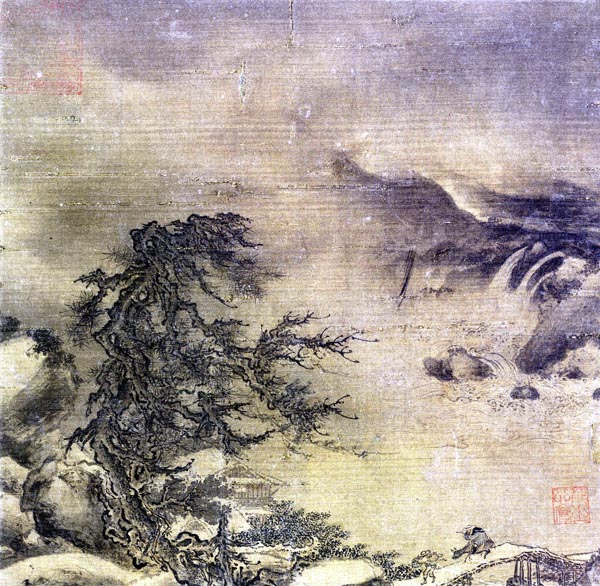 Starlight shining near the plain.

All this writing, but no name.

Illness and years, without a place.

Drifting, wandering, what am I?

A white bird over earth and sky.

Cities, in Spring, have leaves and grass.

Though tears well at half-open flowers.

Home news is worth more than gold.

Grey hairs, tugged at every disaster,

Thin on this head that’s too small for its cap.

Moon at Night in Ch’ang-an

North of here in the moonlight

She too looks up in loneliness.

I am sad for our little children,

Too young to think of far off Ch’ang-an.

Cold light on arms of jade.

When will we two stir the silk curtains

While one moon shows the stain of tears?

Note: Tu is in the occupied capital. The past glory is already distant in time. His wife and children are in Fu-chou in the north-east. Those who are parted are linked to each other through watching the same moon.

By the Waters of Wei

By closed palaces along the river.

New reeds, fresh willows, green for no one.

Once, between South Gardens shining faces,

Sitting by her Lord in his carriage.

Maids of Honour with their bows and arrows

Glanced and shot their careless shafts together,

Killing with a single gleam of laughter.

Bright eyes. Clear smile. Where is She now?

Spirits of the blood-defiled are homeless.

Beyond the Wei’s east-running waters

One entered silence, One was left behind.

By waters and by flowers still the same.

Now curfew, and the dust of Tartar horsemen.

Note: The ill-fated Yang Kuei-fei, whom Hsüan Tsung grieved for so deeply is, by analogy, Flying Swallow consort of the Han Emperor Ch’êng. Tu is probably slipping away to join Su-tsung the Emperor in the North hoping that way to return one day to Ch’ang-an’s light-filled South Gardens.

Ballad of the War Wagons

Noise of wagons. Cry of Horses.

Wives and children run beside them,

Till the bridgehead’s drowned in dust.

When the watcher questions why,

Answer comes, ‘We are the levy’.

At fifteen guard the Yellow River,

At forty work to feed the army.

Young the headman tied your headscarf.

Old you’re destined for the borders,

Where the Han still ask for more.

To the east two hundred places

Where a thousand farms lie fallow.

East and west are vanished furrows,

We who fight the toughest battles

We have learned that sons are bad news,

Better only to have daughters,

Who can marry, where their home is,

When a son is dead and rotten.

By Kokonor along the shoreline,

Whitened bones that no one buries,

New ghosts wail with those before them,

Dark clouds gather to their howling.

The Homecoming (from The Journey North)

Slowly we went on country roads,

Smoke blew rarely on the breeze,

Weeping blood, they cried out loud.

When I looked back to Feng-hsiang

Saw the banners in pale light,

Found where men and horses drank.

Till below us Pin-chou Plains,

Parted by the Ching’s fierce torrent,

Where the Wild Tigers stood,

And split the rocks when they roared.

Beside stones smashed by wagons,

Made my heart reach the clouds.

Simple things give us joy.

Hidden in the densest tangle,

Black as if splashed with lacquer,

Washed by the rain and dew,

Sour and sweet the fruits of nature,

Not this life that’s gone and wasted.

Scrambling through the rocky clefts,

Down towards the river’s edge,

Leave the others far behind.

Listen for the owls in mulberry,

Once a million men positioned

Here to hold the Pass. How many

Ever returned? There perished

Half of Ch’in, now wandering spirits.

I too drowned in alien dust. Back again now.

A year on with whitened hair,

To a poor and simple house,

My dear wife dressed in rags,

Here’s my son, pride of my days,

With face paler than Spring snow,

Who seeing me turns and weeps,

My little daughters by the couch

Patched dresses barely to their knees,

Sea-wave hems that fail to meet,

I’m sick. Must sleep for a while.

But there’s something in my bag

To keep you from the winter’s cold.

Inside them there’s some paint and powder.’

My wife’s thin face is beautified,

The girls, chattering, dress her hair,

Till the scarlet rouge makes eyebrows

Alive! With my children! Home!

All these questions fired at me,

Who could have the heart to stop them?

Thinking what I’ve left behind me,

How the noise of love is sweet!

Note: Written in 757AD when Tu left the Imperial camp at Feng-hsiang having occupied a position as a junior official. It was not a great success probably not through any lack of ability on his part, but more likely due to his uncompromising displays of principle and moral courage. He got home to his family whom he had not seen since the capital had been occupied the previous year.

Only flocks of gulls fly in each day.

The flowered path’s not yet swept for guests.

The willow gate has opened first for you.

It’s simple food we’re so far from the City.

In this poor house there’s only stale rice-wine.

If you’re willing, I can call across the hedge.

Drink it with an Old Neighbour of mine.

All day long in Ch’êng-tu,

Half of it lost - in the clouds,

Half of it lost - in the water.

Is meant for the highest skies.

An ordinary mortal hear it?

Note: Ch’êng-tu (Brocade City) was the ancient capital of Shu in the South West. The poem was a hint to the young general Hua that he should not let his military success tempt him to aspire to or rebel against  the Celestial Throne.

All our days rarely meeting

This evening, what an evening,

Hair on our heads is quickly white,

Half of those we knew have vanished,

Pain of that knowledge hurts us.

Before your house saw my return?

Last time you’d not even married.

Start to ask where I come from.

But the conversation’s halted

You send them off to fetch the wine-jar,

And pull spring onions in the rain,

Cook them now with yellow millet.

Saying ‘Well, we so rarely meet’

Fill my wine-cup ten times over,

Ten but still I’m not quite tipsy,

Filled with feelings of deep friendship.

Tomorrow the high mountains part us,

Lost again in the world.

Tu Fu to T’ao Chien - Across the Centuries

Gone in a flash the bright flowers.

Old. How I wish they would stay!

Why can’t these present things

Be back in our younger days?

We would meet, T’ao, in this thought,

Though we cannot meet in Time.

When Death divides us grief is smothered.

South of the River this land’s poison.

From you in exile no word comes.

Note: In happier times Tu wrote ‘Li, The Most Brilliant, has left the Court so that he is free to chase the Mysteries. Like me he wanders from Liang to Sung. We go to gather magic herbs.’

High And Dry On The Yangtze

Mile on mile of autumn light

To the bright balcony.

Frost on my forehead.

No longer have a body

To take me where the wine led.

On bright waves the glow of stars.

In the sky the Perfect Glass.

Dim as dew weighs down the flowers.

Only as skies unfold, the ‘Flower in the Leaves’.

Between river and stream the ‘Roots of Clouds’.

Cold scars show the past floods.

Waves blow in the evening winds.

Where will I rest, and in whose house?

Note: Tu Fu is near the Hisang River south of Lake T’ung-ting and the Yangtze. The sun in the clouds is the ‘Flower in the Leaves’, the Yang energy that will eventually bring the Spring. The sun, the season, the ‘river’ of the Empire, and the ‘stream’ of the self, Tu Fu, are all subject to the rhythms of time and the Tao. The sun is a red boulder in the sky and the ‘Roots of Clouds’, the red boulders of the Hsiang River, are the shadows of the red morning clouds in the water that were breathed out by the rocks. The red rocks of the present are the clouds of a morning that has passed. The marks on their sides are the visible records of vanished floods. Tu Fu is driven by reality but haunted by the past, its youthful dawn, and its subsequent tears. Yang Chu wept at the crossroads because any road he chose would lead to new crossroads, and could never lead back. Ch’ü Yüan was China’s first great (shamanist and Taoist) poet and incorruptible minister of the kingdom of Ch’u, near Lake T’ung-t’ing, who chose to drown in the Mi-lo River, in protest and despair, after being slandered, rejected and banished. His noble suicide is commemorated in the Dragon Boat Festival. Tu Fu identifies with both men.

Frequently meeting in Palace of Ch’i.

Hearing you sing in Mansion of Chiu.

So lovely here, South of the River,

Note: Perhaps Tu’s last poem, written in the autumn of 770. A famous musician, Li Kuei-nien had performed at Prince Chi’s palace and Ts’ui Chiu’s mansion, places of the ruined Empire.