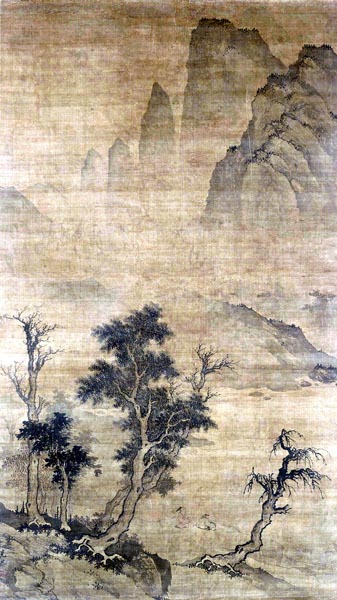 ‘Scholars in a Landscape’ - 16th century

Returning to Live in the Country

Young, I was always free of common feeling.

It was in my nature to love the hills and mountains.

Mindlessly I was caught in the dust-filled trap.

Waking up, thirty years had gone.

The caged bird wants the old trees and air.

Fish in their pool miss the ancient stream.

I plough the earth at the edge of South Moor.

Keeping life simple, return to my plot and garden.

My place is hardly more than a few fields.

My house has eight or nine small rooms.

Elm-trees and Willows shade the back.

Drifting, the soft swirls of smoke.

Somewhere a dog barks deep in the winding lanes.

A cockerel crows from the top of the mulberry tree.

No heat and dust behind my closed doors.

My bare rooms are filled with space and silence.

Too long a prisoner, captive in a cage,

Now I can get back again to Nature.

Returning to Live in the Country II

I always loved to walk the woods and mountains,

Pleased myself, lost in fields and marshes.

Now I go out with nephews, nieces,

In the wilds, parting hazel branches,

Back and forth through the mounds and hollows,

All around us signs of ancient peoples,

Remnants of their broken hearths and well-heads,

Stop and ask the simple woodsman,

‘Where have all these people gone now?’

Turning he looks quietly and tells me,

‘Nothing’s left of them, they’re finished.’

One world. Though the lives we lead are different,

In courts of power or labouring in the market,

These I know are more than empty words:

Our life’s a play of light and shade,

Returning at last to the Void.

Reading the Classic of Hills and Seas

In the summer grass and trees have grown.

Over my roof the branches meet.

Birds settle in the leaves.

I enjoy my humble place.

Ploughing’s done, the ground is sown,

Time to sit and read my book.

Means my friends forget to call.

A light rain from the East,

Blows in on a pleasant breeze.

I read the story of King Mu,

See pictures of the Hills and Seas.

One glance finds all of heaven and earth.

What pleasures can compare with these?

Note: King Mu (1001-947BC) of the Chou Dynasty dined with the Queen of the Immortals, Si Wang Mu, in the Western Paradise (among the Kun-lun mountains of Tibet). There she tended the garden where the peach-tree grew that supported the Universe. Her Paradise was that of exalted purity, the jade or pearl mountain, entered through a golden door. The peaches conferred immortality. She later visited Emperor Wu Ti of Han (r.141-97BC) riding on a white dragon, gave him a peach from the tree, and taught him the secrets of eternal life. Wu built a tower with a golden vase on its summit to collect the pure dew that dripped from the stars.

I built my house near where others live.

Still there’s no sound of wheels or voices.

When the mind is remote the place is distant.

Cutting Chrysanthemums by the Eastern Hedge,

I look out towards the Southern Hills.

Mountain air is fine at end of day.

The flights of birds make for home.

In these things there is a hint of Truth,

but trying to tell it there’s no mind, no words.

Slowly autumn comes to an end.

Grass round here will not be green again,

Trees and leaves are already suffering.

The clear air is drained and purified

And the high white sky’s a mystery.

Nothing’s left of the cicada’s sound.

The Myriad Creatures rise and return.

How can life and death not be hard?

From the beginning all things have to die.

Thinking of it can bruise the heart.

What can I do to lighten my thoughts?

Solace myself drinking the last of this wine.

Who understands the next thousand years?

A fisherman journeying along a stream reached a place where the banks were filled with Peach Blossom. There were fallen petals everywhere and a deep fragrance. The peach groves ended at the source of the stream where a spring came out of the hillside. Then he saw a narrow opening out of which light shone. He left his boat and went inside. He reached a land where everyone seemed happy. The people all came to see him and question him. They said their ancestors had travelled there to escape from the empire of Ch’in and that no one had ever wished to return. They knew nothing of the dynasties of Han and Wei and were amazed at what he told them. He stayed for a while and before leaving they told him that nothing would be gained by revealing their existence.

When he emerged from the hill he took to his boat. He retraced his journey noting every turning. When he returned home he told about his adventure. He was sent with others to show them the route but it was lost. And no one ever found the way there again.