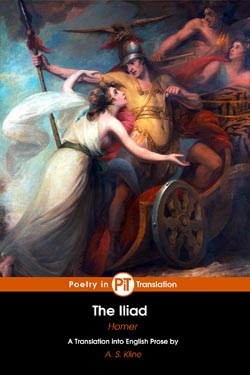 And such were the funeral rites of Hector,

Book I: The Quarrel

Book II: The Catalogue of Ships

Book VIII: The Trojans at the Wall

Book XIII: The Fight at the Ships

Book XV: The Greeks at Bay

Book XVI: The Death of Patroclus

Book XIX: The Quarrel is Ended

Book XXI: The Fight at the River

Book XXII: The Death of Hector

The Text is fully hyper-linked to the index and vice versa.

Each Book is arranged in paragraphs, with each paragraph headed by the corresponding line reference in the Greek text.

The Iliad, a major founding work of European literature, is usually dated to around the 8th century BC, and attributed to Homer. It is an epic poem, written in Ancient Greek but assumed to be derived from earlier oral sources, and tells much of the story of the legendary Trojan War between mainland Greece and the city of Troy in Asia Minor. The cultural background to the poem indicates a Bronze Age setting around 400 to 500 years before the Homeric literary period itself. The poem itself centres on the figure of Achilles the Greek warrior, his quarrel with King Agamemnon the Greek leader, the death of Achilles’ friend Patroclus, and Achilles’ ultimate defeat of the Trojan warrior Hector. In the course of relating this core story, the main events of the whole war are covered. The quality of the writing, the thoughtful treatment of warfare, and the thematic interest of the material have made the Iliad the most influential early work of Western literature, certainly from the time of the Renaissance onwards. Modern archaeological investigation has substantiated Homer’s account of Troy’s location and importance, and many of the details of the Bronze Age culture he describes, giving some historical credibility to the original legends he utilised.

The true authorship and dating of the Iliad and the other great poem attributed to Homer, the Odyssey, has been much disputed. The consistency of language and treatment lends itself to the view that a single author Homer created, or at least consolidated and edited, the literary material. This was the view of ancient Greek authorities, though they differ widely on the question of who Homer was, and at what period he lived. Many mythical elements gathered around the name Homer, until the image of a blind bard from the island of Chios gained prominence, despite there being no evidence of his blindness or his bardic wanderings, and despite many places claiming to have been his birthplace or residence. Equally there is no absolutely definitive text rather the currently accepted text is the result of the work of many editors over a long period of time, from at least the 3rd century BC to modern times. There is much fascinating and erudite scholarship concerning the Homeric ethos, involving literary, linguistic, cultural, archaeological, and other evidence, and debate is ongoing. However the issue of literary authorship in no way detracts from the power and integrity of the epic poems themselves.

Translated by A. S. Kline © Copyright 2009 All Rights Reserved