Whenever anyone deserved to be shown as a crook

A thief, a libertine, a murderer, or merely notorious

In some other way, the true poets, those who powered

Cratinus, used to mark such a man out quite freely.

Lucilius derives from them, as a follower

Who only changed rhythm and metre: witty

With a sharp nose, true, but the verse he wrote was rough.

Two hundred lines, do it standing on one foot even!

A lot should have been dredged from his murky stream.

He was garrulous, hated the labour involved in writing,

Writing well, I mean: I don’t care for mere quantity.

Watch Crispinus offer me long odds: ‘Now, if you please,

Take your tablets and I’ll take mine: pick a time, a place,

The judges: let’s see which of us can scribble the most.’

Thank the gods I’m a man of few ideas, with no spirit,

One who speaks only rarely, and then says little.

But if it’s what you prefer, then you imitate air shut

In a goat-skin bellows, labouring away till the fire

Makes the iron melt. Blessed be Fannius who offers

His books and a bust unasked, while no one reads

What I write, and I’m afraid to recite it aloud

Since some care little for that sort of thing, and most

Men deserve censure. Choose any man from the crowd:

He’ll be bothered by avarice or some wretched ambition.

BkISatIV:26-62 Is a Satirist truly a poet though?

This man is crazy for married women, another for boys:

Marvels at bronze: this man trades his goods from the east

To the lands warmed by the evening rays, rushes headlong

Just like the dust caught up by the wind, full of fear

Lest he loses his capital or the chance of a profit.

All of them dread our verses and hate the poets.

He won’t spare a single friend to get a laugh for himself:

And whatever he’s scribbled all over his parchments

He’s eager for all the slaves and old women to know,

On their way from the well or the bake-house.’ Well listen

To these few words of reply. First I’d cut my own name

From those I listed as poets: it’s not enough merely

To turn out a verse, and you can’t call someone a poet

Who writes like me in a style close to everyday speech.

Give the honour owed to that name to a man of talent,

One with a soul divine, and a powerful gift of song.

That’s why some people have doubted if Comedy

Is true poetry, since in words and content it lacks

Inspired force and fire, and except that it differs

From prose in its regular beat, is merely prose.

‘But it highlights a father there in a raging temper,

Because his son, a spendthrift whose madly in love

With his mistress, a slut, shuns a girl with an ample dowry,

Reels around drunk, and causes a scandal, with torches

At even-tide.’ Yes, but wouldn’t Pomponius get

A lecture no less severe from a real father? So,

It’s not nearly enough to write out a line in plain speech,

That if you arranged it, would allow any father to fume

Like the one in the play. Take the regular rhythm

From this that I’m writing now, or Lucilius wrote,

Putting the first words last, placing the last ones first,

Shattered the iron posts and the gateways of War.’

Even dismembered you’ll find there the limbs of a poet. 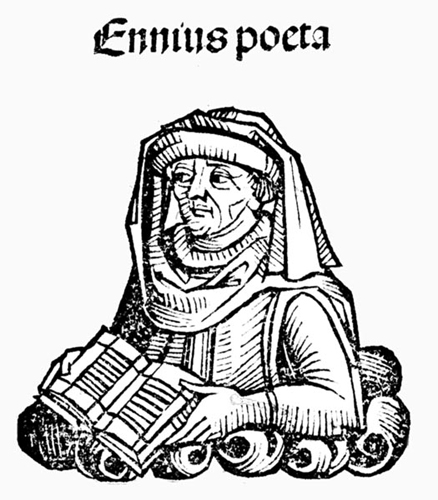 BkISatIV:63-85 Maybe not, but why treat Satire with suspicion?

Enough! We’ll ask some other time if it’s poetry.

The only question for now is whether you’re right

To view such things with suspicion. Sulcius

And Caprius prowl about zealously armed with writs:

And, terribly hoarse, are a terror to thieves: but a man

With clean hands who lives decently, scorns them both.

Even if you’re a Caelius or Birrius, a thief,

I’m not Capri us or Sulcius: so why fear me?

No stall or pillar will offer up my little books

To the sweaty hands of the mob, and Hermogenes:

I only recite them to friends, and only when pressed,

Not anywhere, not to anyone. There are plenty

Who read out their works in the Forum, or baths:

(How nicely the vaulted space resonates to the voice!)

It delights the inane, who never consider, whether

Time and taste are right. ‘But you take delight in wounding

And you work your evil zealously.’ Where did you find

That spear to throw? Is anyone I know the author

Of that? The man who will slander an absent friend,

And fails to defend him from others’ attacks,

Who’s after others’ laughter, and the name of a wit,

A secret: beware of him, Rome, he’s a blackguard.

When there’s a party of four and only three couches,

Often there’s one guest who likes to besprinkle the rest

Excluding his host who supplies the water: his host too

Though later when, drunk, truthful Liber unlocks the heart.

Yet you, hating blackguards, consider him charming,

Direct, and urbane. Did I seem then spiteful or vicious,

If I laughed because stupid Rufillus smells of pastils,

Gargonius of goat? If someone while you were there

You’d be sure to defend him as is your habit:

‘Capitolinus has been a dear friend and companion

Since childhood: he’s done me many a favour when asked,

But I’m still amazed at how he escaped that trial.’

Pure venom. Let such nastiness be far from my work,

And well before that from my heart: if there’s anything

I can truly promise, I’ll promise you that. If I

Speak too freely, too lightly perhaps, you’ll allow me

That liberty, please. The best of fathers formed me:

So I’d flee from vice, he’d point it out by example.

BkISatIV:107-143 My father taught me to be critical

When he exhorted me to be thrifty and careful,

So as to live in content on what he’d leave me:

Is doing, how poor Baius is? A clear warning: don’t

Wilfully squander your birthright.’ Or steering me

From base love of a whore: ‘Don’t take after Scetanus.’

Or from chasing an adulteress where I might enjoy

Or avoid something: it’s enough for me that I follow

The code our ancestors handed down, and while you

Need a guardian I’ll keep your reputation and health

From harm: then when age has strengthened your body

And mind, you can swim free of the float.’ With words

Such as these he formed the child, whether urging me on

If I acted, with ‘You’ve an authority for doing this,’

Pointing to one of the judges the praetor had chosen:

Or forbidding it, with ‘Can you really be doubtful

Whether it’s wrong or harmful, when scandal’s ablaze

About that man and this?’ As a neighbour’s funeral scares

The sick glutton, and makes him diet, fearful of dying,

So tender spirits are often deterred from doing wrong

By others’ shame. That’s why I’m free of whatever vices

Bring ruin, though I’m guilty of lesser failings, ones

Erase even these, or honest friends, or self-reflection:

Since when my armchair welcomes me, or a stroll

In the portico, alert to myself: ‘It’s more honest,’

I’ll say, ‘if I do that my life will be better: that way I’ll

Make good friends: what he did wasn’t nice: could I ever

Unthinkingly do something similar one day?’ So

I advise myself with my lips tight closed: and when I’m free

I toy with my writings. It’s one of the minor failings

I mentioned: and if it’s something you can’t accept,

Are by far the majority), and just as the Jews do

In Rome, we’ll force you to join our congregation!

End of Book I Satire IV