But being a slave daren’t.’ Are you Davus? Yes, Davus,

A servant fond of his master, quite virtuous, but not

Enough so to die young.’ Come on, then, use the freedom

December allows, since our ancestors wished it: speak!

‘Some men love vice, yet follow a constant purpose:

At another time slaves to evil. Priscus, often

Noted for wearing three rings on his left hand, then none,

Lived so capriciously, he’d change his tunic each hour,

From which a plain freedman couldn’t emerge without shame:

Now he’d choose to live as a lecher in Rome, now a scholar

In Athens, born when fluid Vertumnus was changing form.

When the gout he deserved crippled Volanerius’

Finger-joints, that joker hired a man by the day

To pick up the dice, and rattle them in the cup:

Because he stuck to one vice, he was less unhappy

And preferable to one who at one moment handles

A rope that is taut, the next moment one that’s slack.’

BkIISatVII:21-45 And Horace is one

Does it take you all day you gallows-bird, to tell me

‘You praise the good luck and manners of men of old,

But if some god suddenly urged you to visit that era,

You’d refuse every time, ‘cos you don’t really believe

What you praise was better, or else ‘cos you’re not firm

In defence of what’s true, sticking fast in the mud while

Vainly struggling to get free. In Rome you yearn for the fields:

Once there, waverer, you laud the far town to the skies.

Cabbage in peace, call yourself happy and hug yourself

For not partying, as if you’d have to be forced to go.

But Maecenas sends you a late invitation at twilight,

And you scream: “Where’s the lamp-oil? Quick, are you

Deaf?” at the top of your voice, then off you scurry.

Mulvius and your other hangers-on disperse,

With unmentionable curses aimed your way. He says,

“I’m easily goaded on by my belly, it’s true, nostrils

Too, if you wish, but since he’s just the same or worse,

What cause has he to criticise me, and cloak his vices

In decorous words” What if you’re more foolish than me,

Who cost you five hundred! Don’t try and scare me pulling

Faces: control your hands and your spleen, while I preach

The lessons I learned from Crispinus’ door-keeper.’

‘Another man’s wife tempted you: a whore caught Davus.

Which of our sins more deserves the gallows? When Nature

Goads me fiercely, she who naked in the lamplight

Feels the flicking of a distended tail, or wildly,

With her buttocks, urges on the stallion she rides,

Won’t send me off disgraced, or anxious lest some richer

While when you’ve shed your badges of rank, your knight’s ring,

Your Roman clothes, and no longer a worthy, step out

As Dama the servant, hiding your perfumed hair

Under a cowl, aren’t you the slave you pretend to be?

That vies with your lust. What matter whether you sell yourself

To be seared by the lash, killed by the sword, or are shut

Shamefully in her mistress’ chest by a knowing maid,

Cowering, with head between your knees? Hasn’t the husband

Of a sinful wife with lawful powers over both, more

Power over her seducer? Not for her to forgo

Her clothes or rank, and take the lead in sinning, since she’s

A woman, frightened, not able to trust a lover.

It’s ‘wise’ you who goes under the yoke, committing

Self, wealth, reputation and life, to her furious lord.’

‘You’ve escaped! Then I hope you’ll know fear, and be

Cautious after learning your lesson: oh no, you’ll look

To the next chance of terror and ruin, you inveterate slave!

What creature that breaks its chains and flees, returns to them

So perversely? “I’m no adulterer,” you say: nor am I a thief

By Hercules, when I wisely avoid your silver plate.

Remove the risks though: and errant Nature will burst

Free of its reins. Are you my master, ruled by so many

It will never release you from your miserable fears.

Add these words that carry no less weight than those:

Whether one who obeys a slave’s called a proxy, as

Your lot say, or a co-slave, what else am I to you?

Wretch, you who order me around serve another,

So who is free? The wise man: in command of himself,

In himself, smoothed and rounded, so that nothing

External can cling to his polished surface, whom

Fortune by attacking ever wounds herself. Can you

Claim any of this for your own? The woman demands

A fortune, bullies you, slams the door in your face,

Drowns you in cold water, then calls you back! Take your

A despot, and no slight one, oppresses your spirit,

Pricking sharp spurs in your tired flanks, yanking when you shy.’ 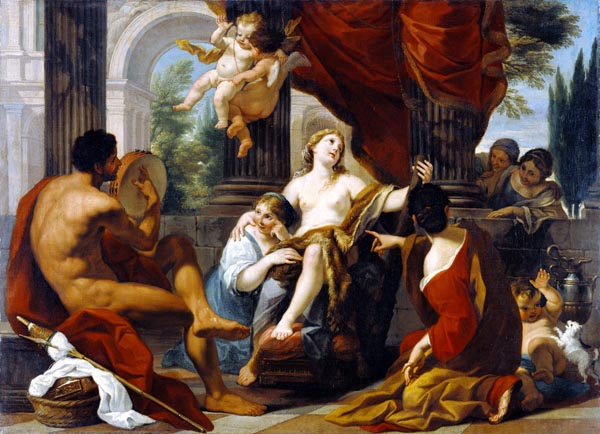 ‘When you gaze like an idiot at Pausias’ paintings,

Why’s that less harmful than my admiring a fight,

Sketched in red-chalk or charcoal, as if they were really

Battling away, thrusting and parrying and waving

Their blades? Davus is a ‘worthless idler’: while you

Pass for a ‘subtle and knowing’ judge of old masters!

But does your great virtuous mind turn down fine dinners?

Why is it worse for me to be slave to my belly?

Because my back pays? But do you escape scot-free

Attracted by delicacies that no small sum will buy?

And overtaxed legs refuse to carry your swollen

Body. Is the slave who trades a stolen bath-brush

For grapes, at nightfall, guilty? Then is he not slave-like

Who sells his estates to serve his gullet? Add that you

Can’t bear an hour in your own company, or employ

Your leisure usefully, that you evade yourself

Like a fugitive, a vagabond, trying to cheat Care

With sleep or wine: vainly: that dark companion dogs

Your flight.’ Bring me a stone! ‘What for?’ Or arrows!

‘The man’s mad, or making verses.’ Scarper, pronto! Or

You’ll end up labourer number nine on my Sabine Farm!