BkIISatVI:1-39 On the Sabine Farm

This was my prayer: a piece of land, not of great size,

With a garden, and a permanent spring near the house,

And above them a stretch of woodland. The gods gave

More and better. It’s fine. I ask for nothing else, O Son

Of Maia, except that you make these blessings last.

If I haven’t increased my possessions by malpractice,

If I don’t intend to reduce them by waste or neglect,

‘O, if that odd corner were mine that spoils the farm’s shape!’

‘O, if chance would show me a pot of silver, like him

Who found treasure and bought and ploughed the same fields

That he once worked for hire, rich by Hercules’ favour!’

If what I have pleases me dearly, my prayer to you

Is: fatten the herds I own, and everything but my head,

And be my great protector just as you’ve always been!

Now that I’ve left town, then, for my castle in the hills,

What better matter for satire, and my prosaic Muse?

Father of the Dawn, Janus if you’d prefer that name,

Under whose auspices men undertake the beginnings

Of labour and life’s toil (so please the gods), introduce

My song. In Rome you drag me off to be guarantor:

‘Up, lest someone else responds first to duty’s call!’

I have to go, even if northerlies sweep the earth,

Then, after declaring, loudly, clearly, whatever may

Work against me, barge through the crowd, hurting the tardy.

‘What’s with you, idiot, what are you up to?’ Some wretch

Curses angrily: ‘There you go, jostling all in your way

When you’re hurrying back to Maecenas, full of him.’

That pleases me, honey-sweet I’ll not deny. But when

I reach the mournful Esquiline, hundreds of other

People’s matters buzz round me and through my brain.

‘Roscius asks you to meet before eight, tomorrow,

At Libo’s Wall.’ ‘Quintus, the clerks say be sure to return

Say I: ‘If you want to, you can,’ he insistently adds. 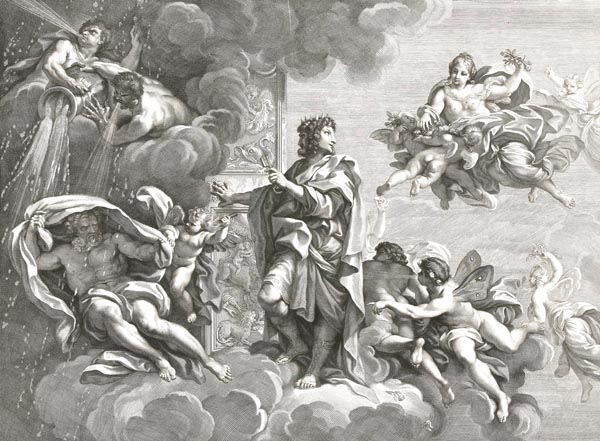 BkIISatVI:40-58 His relationship with Maecenas

Began to count me among his friends, yet up to now

He’s merely been willing to let me share his carriage

When travelling, and confide nuggets like these to me:

‘What’s the time, now?’ ‘Can the Thracian Chicken beat Syrus?

‘These frosty mornings will chill you if you’re not careful.’

And whatever else it’s safe to drop in a careless ear.

All that time, every hour of the day, yours truly has

Grown more envied. If he’s watched the Games with me

Or played ball on the Campus, all cry: ‘Fortune’s child!’

Should a chilling rumour fill the streets, from the Rostra,

Whoever meets me asks my views: ‘My good friend,

Since you, so much nearer the gods, must know, have you

Heard any news of the Dacians?’ Not a thing. ‘Oh,

You’re always teasing us!’ May the gods strike me

If I have! ‘Well then, where does Caesar intend to grant

His men the land he promised, Italy, Sicily?’

When I swear I know nothing, they wonderingly take me

For a remarkably deep and reticent mortal indeed.

BkIISatVI:59-76 The delights of the country

Alas, the day’s wasted like this, and not without prayer:

‘O when shall I see you, my farm? When will I be free

To breathe the delightful forgetfulness of life’s cares,

Among ancient classics, with sleep and idle hours?

When will they set before me beans, Pythagoras’ kin,

And those little cabbages oiled with thick bacon-grease?

O heavenly night-time dinners, when I and my friends

Eat beside my own Lar, and feed jostling servants

On left-over offerings. Each guest drinks as he wishes

Large glasses or small, free from foolish rules, whether

He downs the strong stuff, nobly, or wets his whistle

In more carefree style. And so the conversation starts.

Not about other men’s houses in town, their country

Villas, or whether Lepos dances well or not: no,

We talk about things one should know, that matter more:

And the nature of the good, and its highest form.

BkIISatVI:77-115 The country mouse and the town mouse

Now and then Cervius my neighbour spins us a yarn,

Some apt old woman’s tale. So, if anyone praised

‘It’s said a country mouse welcomed a town mouse once

To his humble hole, the guest and the host were old friends:

He lived frugally, and was careful, but his spirit

Was still open to the art of being hospitable.

In short, he never grudged vetch or oats from his store,

And he’d bring raisins or pieces of nibbled bacon

In his mouth, eager by varying the fare to please

His guest, whose fastidious tooth barely sampled it.

At last the town mouse asks: ‘Where’s the pleasure, my friend,

In barely surviving, in this glade on a steep ridge?

Wouldn’t you prefer the crowded city to these wild woods?

Come with me, I mean it. Since all terrestrial creatures

Are mortal, and there’s no escape from death for great

Or small, then live happily, good friend, while you may

Surrounded by joyful things: mindful while you live

How brief existence is.’ His words stirred the country mouse,

Who scrambled lightly from his house: then the two

Took their way together as proposed, eager to scurry

Beneath the city walls in darkness. And now night

Occupied the zenith, as the pair of them made tracks

Through a wealthy house, where covers dyed scarlet

Glowed on ivory couches, and baskets piled nearby

Held the remains of all the courses of a magnificent

Feast, that had been celebrated the previous evening.

Once the town mouse had seated the country mouse

Amongst the purple, he rushed about like a waiter,

The host serving course after course, performing the role

Himself, and not unlike a slave first tasting what he served.

The country-mouse at ease enjoyed the change of style,

Playing the contented guest amongst all the good things,

When suddenly a great crashing of doors, shakes them

From their places. They run through the hall in fear, stricken

By greater panic when the high hall rings to the barking

Of Molossian hounds. Then says the country-mouse: ‘This

Life’s no use to me: and so, farewell: my woodland hole,

And simple vetch, safe from such scares, they’ll do for me.’