BkIISatI:1-23 Advise me what to write

There are those who think my satire’s too sharp, that I

Push the form beyond its proper limits: others

Think what I write is tame, that a thousand verses

A day could be churned out just like mine. Trebatius

Advise me what to do. ‘Rest.’ You mean I should write

But you know I can’t sleep. ‘Whoever needs sound sleep,

Should rub themselves with oil, swim the Tiber thrice,

Then, as evening falls, refresh themselves with wine.

Or if love of scribbling possesses you, bravely

Many a prize for your pains.’ I wish I could, dear man,

But I lack the power: not everyone can describe

Or a wounded Parthian slipping off his horse.

‘You could write of the man himself, brave and just,

As wise Lucilius did of Scipio.’ I won’t fail

If that chance occurs: but unless the moment’s right

Stroke him wrongly, and he’ll lash out in self-defence.

With bitter verses, or that wastrel Nomentanus,

Till all the unsung fear for themselves, and hate you.’ 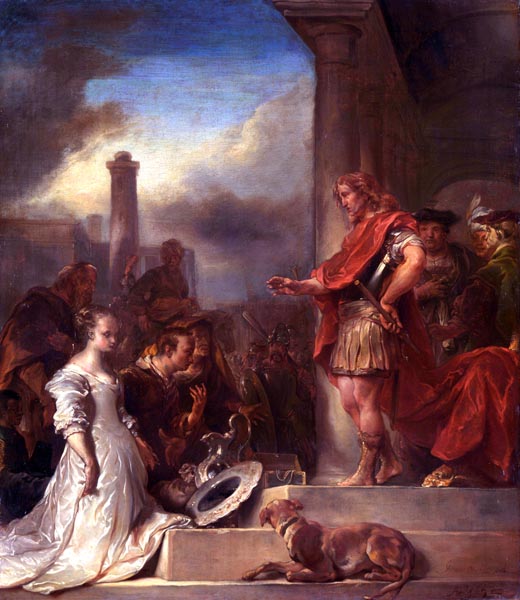 What then? When the warmth mounts to his drunken brain,

And his eyes see double, Milonius likes to dance:

Castor loves horses, his brother born from the same egg

Like Lucilius, a better man than either of us.

He used to entrust his secrets to his books, like faithful

To view, as if it were depicted on a votive tablet.

I’m his follower, Lucanian or Apulian, or both:

Since colonists in Venusia plough the border,

Sent there, as the old tale goes, when the Samnites

Were expelled, so no enemy could attack Rome

Across the gap if Apulian or Lucanian folk

Threatened violent war. But my stylus will never

Harm a living soul, of my free will, only defend me,

My blade’s sheathed: why would I try to draw it, when I’m

Let my weapon rest there, and let it rust away,

Let no one injure me, a lover of peace! But he

Who provokes me (better not touch, I cry!) will suffer,

And his blemishes will be sung throughout the City.

BkIISatI:47-86 I must use the weapons I have

Canidia the poison that finished off Albucius,

Turius a hefty fine if he’s the judge in court.

All use their strongest weapon to intimidate

Those they fear: forceful Nature herself requires it:

Doesn’t the wolf bare its fangs, the bull toss its horns:

How, except by instinct? Trust an elderly mother

To wastrel Scaeva: his pious hand won’t touch her:

No surprise, wolves don’t use their paws, or oxen teeth:

Honey mixed with fatal hemlock will carry her off!

To be brief: whether a tranquil old age awaits me,

Or dark-winged Death comes hovering round me,

Rich, poor, in Rome, or banished perhaps, in exile,

Whatever the nature of my life, I’ll write. ‘Lad,

I fear for your life, lest one of your powerful

Friends freeze you dead.’ Why? When Lucilius dared

To scribble the first poems penned in a style like this,

Stripping the shining surface in which men strut,

Though foul inside, was Laelius troubled by his wit,

Or Scipio who won his name at beaten Carthage?

Did they grieve for wounded Metellus, Lupus buried

By slanderous verses? Yet Lucilius satirised

The leading citizens, the people tribe by tribe,

Only truly favouring Virtue and her friends.

Why, when good Scipio and wise, gentle Laelius,

While the cabbage boiled. Whatever I chance to be,

However far, in rank or wit, below Lucilius,

Envy, reluctantly, must admit I lived among

Great men, and trying to bite on something soft

She’ll sink her teeth in what’s solid. Or do you differ

Wise Trebatius? ‘No I don’t disagree, but still

Let me warn you to be careful lest by chance

You find trouble through ignorance of the sacred law:

If a man trots out false verses, then there are rights

And courts of justice.’ Yes if they are false: but suppose

They are sound and praised by Caesar? If he’s snapped

At one who deserves disgrace, he himself blameless?

‘The score will be wiped clean, you’ll be discharged.’

End of Book II Satire I