Learn how great the virtue is, my friends, of plain living

(This isn’t my advice, but Ofellus’ peasant teaching,

An unorthodox philosopher, and an ‘idiot’ savant)

But not amongst the gleaming dishes on the table,

When you’re dazzled by the sight of senseless show,

And the mind tuned to sham things shuns what’s better,

Discuss it with me here before we eat. ‘But, why now?’

I’ll tell you if I can. Every judge who’s bribed weighs

The evidence badly. But when you’ve hunted hares,

Tired by a spirited horse, or when Roman army sports

Fatigue one used to all things Greek, or fast ball-games

Appeal, where hard toil’s sweetened by the competition,

Or the discus (hurl that discus through the yielding air!) –

When exercise has made you less fastidious, hungry,

Thirsty, then spurn plain food, refuse to drink the mead

Unless it’s honey from Hymettus and red Falernian!

The butler’s off, a dark and wintry sea hides its fish,

Well, bread and salt will soothe a rumbling belly. Why so?

The greatest pleasure’s not in costly flavours, it resides

In you yourself. Obtain your sauce by sweating: pallid

In their ocean wrasse, or oysters, or imported grouse.

Yet I could hardly change your wish to kiss your palate

With the peacock when it’s served, and not the pullet,

With its ornate tail spectacularly spread: as if it

Mattered. Do you ever eat those feathers you admire?

Does it have the same beauty when it’s cooked? The meat

Doesn’t differ between the two, yet to think that you

Prefer this to that, deceived by the appearance! Well:

Was caught in the Tiber or the sea, in the current near

The bridges, or the Tuscan river’s mouth? Madman,

You praise a three pound mullet you’ve to eat in portions.

It’s the size that attracts you I see, well then why not

A large pike? Because no doubt the pike’s naturally

Larger, while the mullet’s normally much smaller.

‘I’d love to see something huge served in a huge dish,’

Cries a throat that would be worthy of the Harpies.

Come you Southerlies and spoil their fare! And yet

However fresh the boar and turbot they already stink,

Since too much richness upsets a weakened stomach,

Gorged, it much prefers radishes and bitter leaves.

So long since the auctioneer Gallonius’ serving sturgeon,

Caused a scandal. And the sea hid as much turbot, then.

Yet turbot were still safe, and storks safe in their nests,

Till a creative ‘praetor’ led you astray! So that now,

If someone proclaimed roast seagulls were tasty,

The youth of Rome, so easily seduced, would agree. 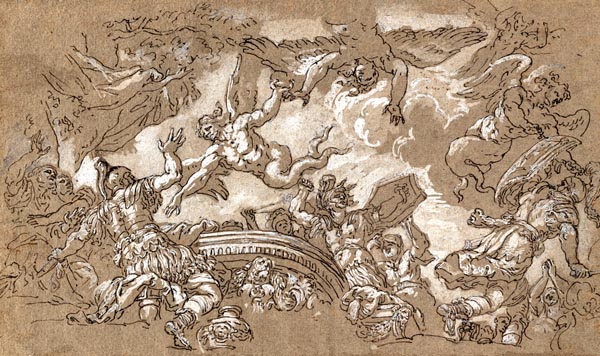 Ofellus judges that a mean life is different

From a plain one: so it’s foolish for you to avoid

One fault and steer towards another. Avidienus

To whom the nickname of ‘the Dog’ rightly clings,

Eats olives five-years old and cornels from the woods,

And won’t decant his wine till it’s soured, you’d detest

The smell of his olive oil, yet even on birthdays

Or weddings, or other occasions, in a clean toga,

He drips it on the salad from a two-pint horn,

With his own hands, though he’s free with his old vinegar.

What mode should the wise man adopt, which of these two

Should he copy? One side the wolf, as they say, the other

The dog. Well he’ll be worldly enough not to offend us

By meanness, and cultured enough not to be wretched

In either way. He’ll neither be cruel to his slaves

BkIISatII:70-88 The virtues of the simple life

First good health. Think how simple fare once suited you

If you want to discover how ill-assorted courses

Harm a man. As soon as you mix boiled and roast,

Or oysters and thrushes, the sweet juice will turn acid,

The thick bile will cause stomach-ache. See how pale

The diners all seem as they leave the doubtful feast!

Bloated with yesterday’s excess the body weighs down

The soul, and nails a fragment of divine spirit to earth.

But the plain-living man who eats then snatches a nap

Quick as a flash, rises refreshed for his appointed tasks.

He can still turn to a richer diet, when an annual holiday

Comes round, or he wants to fill out his slender frame,

But if severe illness strikes you, or feeble senility,

How can you increase those indulgences you take

So much for granted while you’re young and healthy?

Our ancestors praised boar eaten when high: not

That they lacked a sense of smell, but thinking, perhaps,

That though rank it was better kept for a guest arriving

Late, than eaten greedily by the host when still fresh.

If only time past had reared me among such heroes!

Sweetly than song: but huge dishes of giant turbot

Bring huge disgrace and loss: add to that the angry

Uncle, the neighbours, your self-disgust, your vain

Longing for death, lacking even the means to buy

A rope. ‘Oh, it’s fine to criticise Trausius like that,’

You say, ‘but my income’s vast and I’ve more wealth

Than a clutch of kings.’ Well then, isn’t there something

Better you can spend the surplus on? Why, when you’re

Rich, are there any deserving men in need? Why are

The ancient temples of the gods in ruins? Why, man

Without shame, don’t you offer your dear country a tithe

From that vast heap? You alone, is it, trouble won’t touch!

O how your enemies will laugh some day! In times

To excess, or the man content with little, wary

Of what’s to come, who wisely in peace prepared for war?

BkIISatII:112-136 Make the best of what fate brings

Ofellus, as I know well, spent no more widely, then,

When his wealth was intact, as now it’s reduced.

You can see him there with his sons and herd, a solid

Tenant on his lost farm. ‘I was never one,’ he says,

‘To eat rashly on working days, no more than greens,

A shank of smoked ham, and if friends came to visit

I’d not seen for ages, or if I welcomed a neighbour

On a wet day when I couldn’t work, we dined well,

Not on fish from town, but a kid or a pullet: then

Raisins and nuts and split figs graced our dessert.

After it drinking matches with a forfeit for losing,

And with a prayer to Ceres: ‘May she raise the stalks high’,

She smoothed care from our furrowed brows with wine.

How can she lessen this? How much worse off have I

Or you been, my lads, since this new landlord arrived?

Nature makes no-one, not he nor I, the true owner

Of the land: he replaced us, and he’ll be replaced

Through incompetence, not grasping legal subtlety,

Or, failing all that, by the heir that outlives him.

No one will truly own it, but it will be worked

Now by me, now another. So live bravely, as men

With brave hearts do, and confront the vagaries of fate.