BkISatX:1-30 The art of writing well

Yes, I did say Lucilius’ verses ran on stumbling

Feet. Who’s so absurd a fan of Lucilius not to

Admit it? Yet on the same page the same man’s praised

For scouring the City with all the salt of his wit.

Still, granting him that, I wouldn’t admit all the rest,

Or Laberius’ mimes would have to be called fine poetry.

It isn’t enough for your listener to crack his jaws

Laughing: though there’s a virtue still in achieving that:

Conciseness is needed, so that the thought can run on,

Un-entangled by words that weigh heavy on weary ears:

And you need a style sometimes serious, often witty,

Suiting the role now of orator now of poet,

At times the urbane man who husbands his strength

And parcels it out wisely. Ridicule usually

It was the mainstay of those who wrote Old Comedy,

In it, they should imitated: those whom pretty

Hermogenes never reads, nor that ape whose art

Is only his skill in singing Catullus and Calvus.

‘But it was a great achievement to blend Greek and Latin.’

Or hard to do what Pitholeon of Rhodes achieved!

‘But a style harmoniously mixing both languages

When you’re writing verse, I’ll ask you, or also

Would you really prefer to forget home and country,

And while Pedius Publicola and Corvinus sweat

Over their cases in Latin, mingle foreign words

BkISatX:31-49 I decided to write Satire

Though born this side of the sea, I too made versicles

In Greek, but after midnight, when dreams are true,

A vision of Quirinus forbade me to do so, saying:

Your desire to swell the mighty ranks of the Greeks

Is as stupid as carrying wood to the forest.’

And muddies the head of the Rhine, I toy with these,

That won’t resound in the Muses’ temple competing

For Tarpa’s prize, nor be staged, again and again.

Fundanius, you alone of the living, delight us

With chatty comedy where the crafty whore and Davus

Cheat old Chremes: and Pollio, with a triple beat,

Have granted rare tenderness and grace. What Varro

Of Atax, and others, a few, attempted in vain,

Satire, is what I could write more effectively,

Though less well than its inventor: I’d not presume

To snatch the crown that clings to his head in glory. 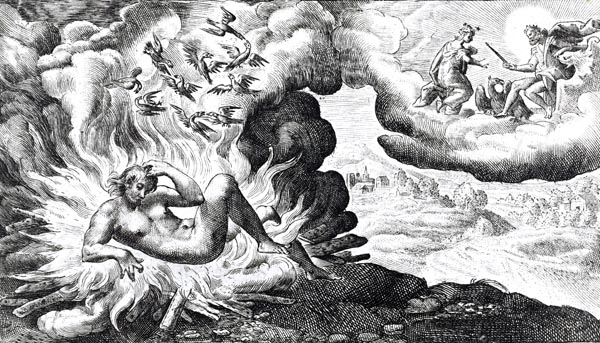 But I do say he flows muddily, often carrying

What you’d rather remove than let remain. Well,

As a scholar do you never criticise Homer?

Though he considers himself no greater than them?

What forbids us readers of Lucilius’ writings

To ask whether it was a harshness in himself,

Or in his times, denied more finish to his verse,

A smoother flow, he who’s content merely to stuff

Lines before dinner, and the same after? So Etruscan

Cassius did too, whose own nature was fiercer

Than a raging river, his shelves of books, so it’s said,

Than a maker of rough forms the Greeks never touched

And than the crowd of older poets: but he, had he

Happened to be destined to live in our age, he too

Would have rubbed away, cutting out whatever was

Less than perfect, scratching his head as he made

His verses, and often biting his nails to the quick.

BkISatX:72-92 We should write for the few not the many

If you want to write what’s worth a second reading,

You must often reverse your stylus, and smooth the wax:

Don’t write to amaze the crowd, be content with the few.

Are you mad enough to want your poems mouthed in school?

Not I: as proud Arbuscula said when they hissed her act,

‘It’s fine so long as the knights applaud’: she scorned the rest.

Should I bother about that louse Pantilius, should I

Be tortured by Demetrius’ sneers behind my back,

Only let Plotius commend me, and Varius

Maecenas, Virgil, Valgius, and the best of men

And I can name you Pollio, without flattery,

And you, and your brother, Messalla, and you,

Bibulus, Servius, and you my honest Furnius,

And many another learned friend, I’m aware

I omit: and I’d like these verses, such as they are,

To please them, grieved if they delight them less than I

Hope. But you Demetrius, you Tigellius, go carp

Among the armchairs of those female disciples!

Go boy, quickly, add these lines to my little book.

End of Book I Satire X