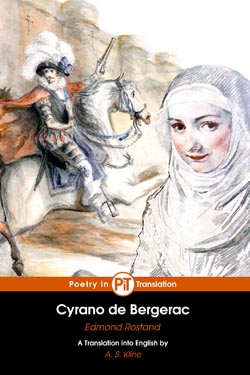 They’re made of a Venetian gold.

Look at them falling!

Act One: A Theatrical Production at The Hotel Burgundy

Rostand’s Cyrano is a fiction invoking the real Cyrano de Bergerac, a seventeenth century French playwright, poet, and duellist, who was an early creator of science-fiction fantasy, in particular a comic history of a journey to the Moon. From the scanty details of the real Cyrano’s life documented by his friend Henri Le Bret, Rostand created a larger than life comic hero, whose wit, courage, spirit and ability partially overcome his physical defect, an embarrassingly large nose. Rostand cleverly and meticulously evokes the historical period in which his hero lived. The play is written in rhyming verse, as is this translation, stylistically supporting some of the play’s best wit and verbal effects. The plot centres around Cyrano’s unrequited and unrecognised love for Roxanne; his indomitable courage in the face of disappointment and failure; and the many ways in which he defends himself and attacks his enemies while never losing his sense of humour, his delight in words, and his panache. There are moments of rare beauty and pathos in the verse, and the overall effect certainly justifies the immense enthusiasm that greeted its first performances, and the many revivals of the play since, especially in film adaptation. 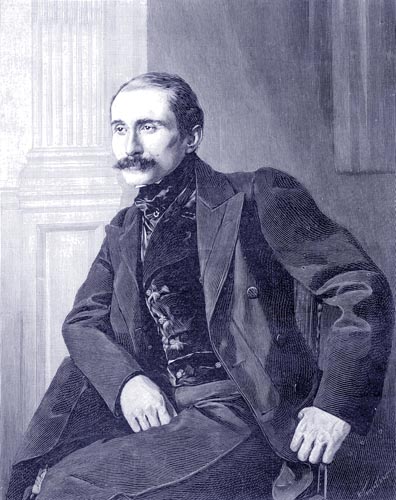 Edmond Rostand, the French poet and dramatist, usually associated with neo-romanticism, was born in 1868 in Marseille, into a distinguished and wealthy family. His early poetry and plays achieved modest success, but it was the creation of his mock-heroic drama Cyrano de Bergerac, in 1897, with the great French actor Coquelin playing the title role, that brought him wider fame. A later play L’Aiglon, concerning the unhappy life of Napoleon’s son, the Duke of Reichstadt, produced and performed by Sarah Bernhardt, at her own theatre, in 1900, was also well received. Rostand moved to live in the French Basque country during the 1900’s, seeking a favourable climate for the pulmonary disease with which he was afflicted, and became a victim of the flu pandemic at the close of World War I, dying in 1918. He is buried in Marseille.

Translated by A. S. Kline © Copyright 2003 All Rights Reserved

This work may be freely reproduced, stored and transmitted, electronically or otherwise, for any non-commercial purpose. Conditions and Exceptions apply. Permission to perform this version of the play, on stage or film, by amateur or professional companies, and for commercial purposes, should be requested from the translator.