(Record of a Journey from Paris to Jerusalem and Back) 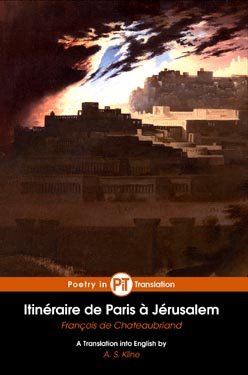 Your soul has felt it all, your imagination has painted it all

Travels in Greece, Palestine, Egypt, and Barbary, during the years 1806 and 1807, Translated by Frederic Shoberl - François René de Chateaubriand (p8, 1812)
The British Library

Chateaubriand set out on his travels to the Middle East in the summer of 1806, returning via Spain in 1807. His trip was ostensibly to provide background material for his work Les Martyrs, a Christian epic in prose, but may also have helped to resolve certain problems in his private life. He travelled to Greece and Constantinople on his way to Jerusalem, returning through Egypt, Tunisia and Spain.

His record of the journey often contrasts the meagre contemporary state of civilisation in Greece, Turkey and the Holy Land with the richness of classical antiquity and the Christian past. While not purporting to offer fresh archaeological evidence, he established a ‘tourist route’ through that antiquity which many other travellers would follow. He was, in his own words, “...in some ways the last visitor to the Turkish Empire in its previous form” before the progressive revolutions of the Eastern Question gradually weakened Ottoman control.

As always, Chateaubriand enriches his narrative with extensive quotations and vivid moral and philosophical perceptions, to create a colourful and resonant self-portrait of the intelligent wealthy European traveller, in touch with the ancient world through Christian and Classical writers, and dismayed by the present but stimulated and inspired by the past. His account of Jerusalem is fascinating, and he was one of the last travellers to visit the Church of the Holy Sepulchre before the damaging fire of 1808.

This new, modern translation conveys the verve and flow of his narrative while, for the first time, identifying within the text all the quotations and sources of Chateaubriand references.

Despite the estimation of Cardinal de Bausset, former Bishop of Alais, that Chateaubriand was “...the first and only traveller who has no need of etchings and drawings to bring places and monuments which recall beautiful memories and grand images before his readers’ eyes” this new edition also collates a selection of engravings and lithographs from nineteenth-century travelogues by celebrated artists such as Edward Dodwell Esq, F.S.A, Thomas Allom Esq, William Henry Bartlett, David Roberts R.A. and Louis Haghe.

Translated by A. S. Kline © Copyright 2011 All Rights Reserved