Maecenas, though none of the Lydians settled

In Tuscany is of nobler birth than yours,

And though your maternal and paternal grandfathers

You don’t turn your nose up as most men do

At men of unknown birth, sons of freedmen like me.

By the fact that before low-born Tullius ruled,

Lived virtuous lives and were blessed with high office:

While Laevinus, scion of that Valerius from whom

Tarquin the Proud fled, driven from his throne, was never

Rated a penny higher, even in the crowd’s judgement,

To the unworthy, and are sadly enthralled by fame,

Dazzled by titles, and ancestral busts. What about us

Then, being far, far removed from the vulgar masses?

Let us accept the people would rather put Laevinus

In office, than unknown Decius, and a censor like Appius

Father: rightly, for not having stuck to my own ass’s skin,

Yet Ambition drags all along bound to her glittering

Chariot, noble and lowly. What use was it Tillius for you

To resume the broad stripe you lost, becoming a tribune?

Envy grew, that of a private person would have been less,

For as soon as anyone’s crazy enough to bind black

Senatorial thongs to his legs and wear the broad stripe

To be deemed handsome, so that wherever he went

He’d incite girls’ interest in personal details, what of

His face, his ankles, his feet, his teeth, and his hair:

Well he who promises to care for the city and people,

The Empire, and Italy, and all the gods’ temples,

In who was his father, and whether his mother’s low-born.

‘Do you the son of a slave, a Syrus, a Dama, a Dionysius,

Dare to hand us over to Cadmus or hurl us from the Rock?’

‘But, Novius, my colleague’ he cries, ‘is only a row behind

In the theatre, he’s what my father was.’ ‘And does that

Make you Messalla or Paulus? If two hundred carts

In the Forum meet three big funerals, this Novius at least

Shouts loud enough to drown out the horns and trumpets.’

I turn again to myself, now, the son of a freedman,

Denounced by everyone as ‘the son of a freedman’

Because as tribune I commanded a Roman legion.

Yet the situations differ, since one who’d begrudge

Me honours, shouldn’t begrudge me your friendship,

Given you’re careful only to patronise the worthy,

Men free of self-seeking. I can’t say I was lucky

Enough to win your friendship just by good fortune:

It wasn’t luck indeed that revealed you to me: Virgil,

The best of men, and Varius, told you what I was.

Meeting you face to face, I stuttered a few words,

I didn’t claim to be born of a famous father,

Or rode a horse round a Tarentine estate,

I said what I was. You said little, as is your way,

I left: nine months later you recalled me, asking

Me to be one of your friends. And I think it’s fine

To have pleased you, who separate true from false,

Not by a man’s father but by his pure life and heart. 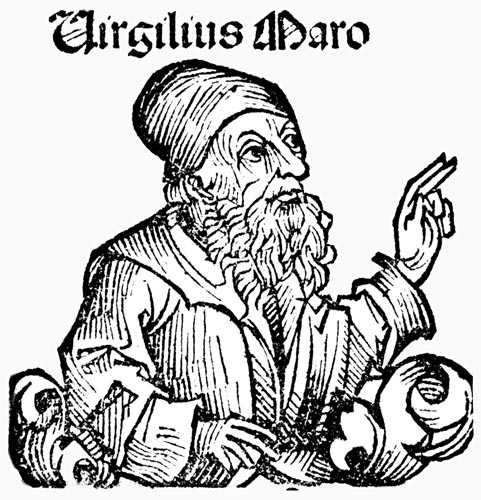 BkISatVI:65-88 Horace’s debt to his father

Still, if my character’s flawed by only a few little

Perhaps the blemishes scattered over a noble body:

And if no one can accuse me in fairness of greed,

Meanness, debauchery, if in truth, in my own praise,

I live purely, innocently, loved by my friends:

It’s due to my father, who though poor, on poor land,

Wouldn’t send me to Flavius’ school, where fine lads

The sons of fine centurions went with their tablets

And satchel hanging from their left shoulders, carrying

Their eight coins as fee on the Ides of each month,

But instead he bravely whisked his son off to Rome,

To be taught the skills senator or knight would expect

To be taught his son. And if anyone noticed my clothes

And attendants, a big city scene, he’d have thought

The expenses were being met from ancestral wealth.

He, the truest of guardians, toured all my teachers

With me, too. What can I say? He guarded my innocence,

And that’s virtue’s prime ornament, he kept me free

Not only from shameful actions, but slander as well.

If I’d only followed the trade of an auctioneer

Or collector of dues like himself: I’d not have complained

As it turns out I owe him still greater praise and thanks.

BkISatVI:89-109 His satisfaction with his fate

I’d be insane to be ashamed of such a father,

So I won’t defend myself by saying, as many do,

It’s not their fault they don’t have well-known, noble

Parents. What I say and think are quite otherwise:

If at a certain point in our lives Nature required us

To relive the past, and choose what parents we wished,

To suit our pride, then I’d still be content with mine,

I’d not want parents blessed with rods and thrones.

The crowd would think me mad, you sane perhaps,

For not wishing to carry an unaccustomed burden.

I’d be forced at once to acquire more possessions,

So as not to travel or visit the countryside alone,

While now I can ride on a gelded mule to Tarentum,

Its flanks galled by a heavy pack, withers by the rider:

No one will call me vulgar, Tillius the praetor,

As they do you, when five slaves, on the Tibur road,

Follow behind you with a chest, and a case of wine.

In this, in a thousand other ways, I live in more

Comfort than you, my illustrious Senator.

I wander wherever I choose, alone: ask the price

Of cabbage and flour, stroll round the dodgy Circus

And Forum at evening: loitering by the fortune-tellers:

Then home to a dish of oilcake, chickpeas, and leeks.

And a ladle: a cheap bowl too, oil-flask and saucer:

All Campanian ware. Then to bed, with no worries

With its pained face, that can’t stick Novius Junior’s.

I lie in bed till ten: then take a stroll: or after reading

Or writing work I’ll enjoy in peace later, rub myself

With oil, but not what dirty Natta steals from the lamps!

When I’m tired and the hot sun tells me to go and bathe,

I avoid the Campus and those three-way ball games.

I take a light lunch, enough to prevent me fasting

All day long, then I idle about at home. This is the life

Of those relieved of the weight of wretched ambition:

I comfort myself, this way, that I’ll live more happily

Than if grandfather, father and uncle had all been quaestors.

End of Book I Satire VI