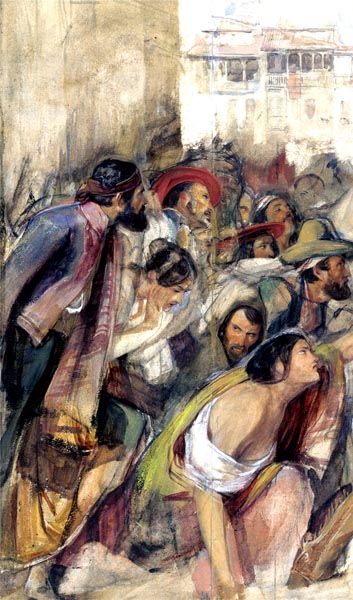 Translated by A. S. Kline © Copyright 2008, All Rights Reserved.

Please note that Federico García Lorca's original, Spanish works may not be in the public domain in all jurisdictions, notably the United States of America. Where the original works are not in the public domain, any required permissions should also be sought from the representatives of the Lorca estate, Casanovas & Lynch Agencia Literaria.

The carefree traveller, replete with smiles and the screeching of locomotives, goes to the carnival at Valencia: the Bacchic reveller, to Holy Week in Seville: the man burning with desire for nudes, to Málaga. The melancholic and contemplative go to Granada, to be alone with a breeze filled with sweet basil, dark moss, and the trilling of nightingales that flows from the ancient hills to meet that bonfire of saffron, deepest greys, and blotting-paper pinks that is the facade of the Alhambra. To be alone, in contemplation of an ambience full of ambiguous voices, in an atmosphere whose power of beauty is almost thought, at the nerve-centre of Spain where Saint John of the Cross’s poetry of the heights filled with cedars, cinnamon, and fountains, and where Spanish mysticism opened to the breeze from the orient, that ‘wounded stag seen on the hill, pierced by love’.

To be alone, in a solitude that is lacking in Florence; to comprehend the play of water; not as it plays at Versailles, but as in the Passion of water, the agony of water.

Or to be in amorous company and see how spring quivers in the trees, and beneath the skin of delicate marble columns, how the yellow orbs of lemons swell in the groves, pushing at the frightened snow.

Whoever wants to feel the sweet ticking of blood in the lips and know the outer courage of the bull should join the baroque tumult of all-encompassing Seville; but whoever wants to participate in a gathering of ghosts and find perhaps some marvellous antique ring in the passageways of the heart, must go to intimate, secretive Granada. It will not be long before the traveller finds, a pleasant surprise, that there is no Holy Week in Granada. Holy Week does not suit the reserved Christian character of the Granadan. When I was a child, I sometimes went to the Holy Interment; but only sometimes, because the rich Granadans often chose not to spend their money on such parades.

In the last few years, with an exclusively commercial motivation, they have staged processions that lack the seriousness and poetry of the old Holy Week of my childhood. Then it was a Holy Week of lace, of canaries flying between the tapers on the monuments, of an atmosphere tepid and melancholy as if the whole day were slumbering around the opulent throats of the single Granadan women, promenading on Holy Thursday yearning for a soldier, judge or foreign professor to carry them off somewhere. Then the entire city was like a slowly turning merry-go-round entering and emerging from churches surprising in their beauty, a fantastic combination of the grotto of death and the apotheosis of the dance. There were altars strewn with wheat, others adorned with little cascades, while some displayed the tender poverty of the fairground shooting gallery: this one covered with reeds, like a celestial hen-hutch of fireworks, that one, immense, in cruel purple, with the ermine and sumptuousness of Calderón’s poetry.

In a house on the Calle de la Colcha, the street where wreaths and coffins for the poor are sold, the ‘legionaries of Rome’, the soldaos, would gather. These soldiers were not a formal fraternity, like the cheeky armaos of the marvellous Macarena Fraternity of Holy Week in Seville. They were hired hands: porters, shoe-shine boys, patients fresh out of hospital needing to earn something. They sported the red beard of a Schopenhauer, a brindled cat or a ferocious professor. The captain was a military technician who taught them to mark time, like this: ‘lan...ces!’, and they would strike the ground with their lances, to delightful comic effect. As an example of popular Granadan wit, may I say that one year the Roman legionaries were all at sixes and sevens at rehearsal, and spent more than a fortnight furiously striking their lances on the ground before they could do it in unison. At one point, the captain, in desperation, cried out: ‘Enough, enough! No more thumping! If you go on like this you’ll have to carry what’s left in candle-sticks!’ – A truly Granadan speech much enjoyed by subsequent generations.

I would beseech my countrymen to restore Holy Week to what it was, and have the good taste to hide away that hideous progress of the Last Supper, and no longer profane the Alhambra, which is not and never will be Christian, with the din of processions, where pretentiousness is deemed good taste and which only serve for crowds to shatter the laurels, trample on the violets, and piss in their hundreds against the illustrious walls of poetry.

Granada should preserve her inner Holy Week for herself and the visitor; so intimate and silent I recall that a startled breeze from the Vega could enter by the Calle de la Gracia and arrive at the Plaza Nueva without encountering a noise or a song.

Then Granada’s snow-capped spring will be perfect, and the intelligent visitor, by means of the festival, will be able to converse with her classic types: Ángel Ganivet Y García’s oceanic man, whose eyes are fixed on the hidden lilies of the Darro; the watcher of sunsets who climbs anxiously to the rooftop; the one who loves the Sierra as form without ever having been there; the dark-haired beauty who yearns for love, seated beside her mother in the garden; that whole city of admirable contemplatives who, surrounded by a unique natural beauty, desire nothing and only know how to smile.

The uninformed visitor, amidst the incredible variations in form, vista, light and fragrance, will experience the feeling that Granada is the capital of a kingdom with its own art and literature, and will encounter a curious mix of Jewish Granada and Moorish Granada, both apparently blended by Christianity but alive and incorruptible in their respective unknowing.

The prodigious bulwark of the cathedral, the great Imperial and Roman seal of Charles V, have not effaced the little shop of the Jew who prays before a form cast from the silver of the seven-branched candelabrum, just as the tombs of the Catholic Kings have not prevented the crescent moon from appearing at times on the breast of Granada’s finest sons. The dark and expressionless struggle continues…expressionless? No, because on the Colina Roja are two palaces, both empty: the Alhambra and the palace of Charles V, which sustain that duel to the death that flickers in every true Granadan heart.

All this, the visitor should gaze at in Granada, who at this moment is donning her trailing springtime dress. As for the caravans of noisy tourists and the lovers of cabaret and grand hotels, those frivolous parties that the people on the Albaicín call los tios turistas, to them the city’s soul is closed.