With illustrations by Hendrik Goltzius (The Netherlands, 1558-1617) courtesy of LACMA and the Rijksmuseum. 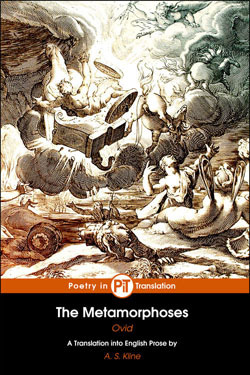 I change but I cannot die.

The Text is fully hyper-linked to the Mythological index and vice versa. Each Book is arranged in paragraphs, with each paragraph headed by the corresponding line reference in the Latin text.

In the Metamorphoses Ovid retells stories from the Greek myths, arranging them in roughly chronological order, from the origins of the world to his own times. His charming and graceful versions, full of life and interest, express his humanist approach, his feeling for pathos, and his endless curiosity and delight in human affairs. Each tale involves a transformation of some kind, and the whole collection provided a potent source of motifs and images for later art, especially the paintings, sculpture, and verse of the Renaissance.

The role of women in the myths seems particularly important to Ovid, and this aspect of his work, his interest in the female element, is reflected elsewhere in his poetry, and strongly influenced European culture. Dante, and Shakespeare, in particular, echo sentiments and imagery in the Metamorphoses.

The Metamorphoses are an ideal resource for those wishing to enter the world of the Greek myths, as well as the refined atmosphere of Augustan Rome. Ovid was aware of the scale and beauty of his achievement, and himself ended the work with a promise of his own literary immortality.

Ovid (Publius Ovidius Naso) was born in Sulmo, Italy in 43BC. Intended for the law he instead took up poetry, writing the Amores, and the Art of Love (Ars Amatoria), works which caused offence in some quarters, including amongst the ruling dynasty. Ovid made amends, to a degree, in the Metamorphoses, where Augustus and Livia are echoed in Jupiter and Juno, and marriage is celebrated in key moments of the text.

Involved on the fringes of power and politics, it seems that Ovid saw but was not directly implicated in some event that antagonised the Emperor. Ovid was banished in 8AD, to Tomis (now Constanta, in Romania) on the Black Sea coast. In his letters from exile he claims his punishment was for a poem, probably the Art of Love, and an error. The details of the error remain unknown.

Prevented from returning to his beloved Rome, but still continuing to write from an alien land, Ovid outlived Augustus, and died at Tomis in 17AD.

A Honeycomb For Aphrodite - Reflections On Ovid’s Metamorphoses, by A. S. Kline

An essential companion volume to the author's translation of the work itself. The nature and structure of Ovid’s brilliant retelling of Greek myths is explained, while emphasising his broadly humanist approach. The concept of loosely connected tales linked and sustained by the author’s style, personality, and world-view, is contrasted with the epic mode as exemplified by Virgil’s Aeneid, while seen as being justified in its own right.

A Honeycomb for Aphrodite argues for a more thoughtful appreciation of Ovid’s major creation, claiming that his design is more than just a vivid and charming re-telling of the Greek originals, but a deeply-felt humanist development. 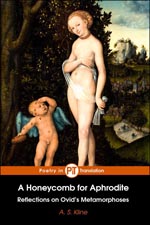 Translated by A. S. Kline © Copyright 2000 All Rights Reserved