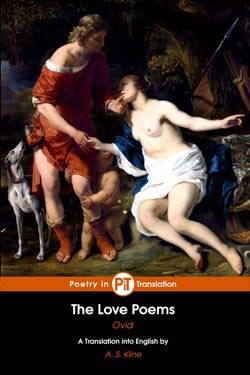 this work that will still stand forever, when I’m dead.

The Amores was Ovid’s first book of poetry, consisting of love elegies, involving the possibly-fictitious Corinna. Mildly subversive it was published in 16BC, in five books, but later edited by Ovid into its surviving three-book form. Ovid makes extensive use of humour and parody to celebrate the elegy as a creative mode as deserving of immortality as the Virgilian epic. His gentle humanism is always evident throughout.

Ars Amatoria (The Art of Love)

The Art of Love, Ars Amatoria, was written in 2AD as a series of elegies purporting to teach young men and women how to succeed in the game of lovemaking. Provocative and light-hearted in tone, it caused offence, and was possibly a factor in, or at least an excuse for, Ovid’s later banishment by Augustus. The whole work gives a lively view of Augustan Rome, while exhibiting the typical charm and beauty of Ovid’s verse.

Remedia Amoris (The Cures for Love)

The Cures for Love, Remedia Amoris, is a companion piece to the Art of Love, suggesting ways of evading the pain of love, and ending relationships. However subtle use of the elegiac form tends to operate counter to this aim, rendering the work as much a celebration of relationship as a series of poems against it. Ovid, the ‘Master of Love’, is here the Doctor, though one in whose cures one suspects he himself placed little faith.

Ovid (Publius Ovidius Naso) was born in Sulmo, Italy in 43BC. Intended for the law he instead took up poetry, writing the Amores, and the Art of Love (Ars Amatoria), works which caused offence in some quarters, including amongst the ruling dynasty. Ovid made amends, to a degree, in the Metamorphoses, where Augustus and Livia are echoed in Jupiter and Juno, and marriage is celebrated in key moments of the text.

Involved on the fringes of power and politics, it seems that Ovid saw but was not directly implicated in some event that antagonised the Emperor. Ovid was banished in 8AD, to Tomis (now Constanta, in Romania) on the Black Sea coast. In his letters from exile he claims his punishment was for a poem, probably the Art of Love, and an error. The details of the error remain unknown.

Prevented from returning to his beloved Rome, but still continuing to write from an alien land, Ovid outlived Augustus, and died at Tomis in 17AD.

Translated by A. S. Kline © Copyright 2001 All Rights Reserved