Book I: Satire I

BkISatI:1-22 Everyone is discontented with their lot

With the lot he chose or the one fate threw in his way,

But praises those who pursue some alternative track?

Body shattered by harsh service, bowed by the years.

The merchant however, ship tossed by a southern gale,

Says: ‘Soldiering’s better. And why? You charge and then:

It’s a quick death in a moment, or a joyful victory won.’

When a client knocks hard on his door before cockcrow

The adept in justice and law praises the farmer’s life,

While he, going bail and having been dragged up to town

From the country, proclaims only town-dwellers happy.

Quoting all the other numerous examples would tire

Even that windbag Fabius. So to avoid delaying you,

Here’s what I’m getting at. If some god said: ‘Here I am!

Now I’ll perform whatever you wish: you be a merchant

Who but now was a soldier: you the lawyer become a farmer:

You change roles with him, he with you, and depart. Well!

What are you waiting for? They’d refuse, on the verge of bliss.

What in reason would stop Jove rightly swelling his cheeks

Then, in anger, and declaring that never again will he

Be so obliging as to attend to their prayers.

BkISatI:23-60 All work to make themselves rich, but why?

Then again, not to pass over the matter with a smile

Like some wit - though what stops one telling the truth

While smiling, as teachers often give children biscuits

To try and tempt them to learn their alphabet? -

No: joking aside, let’s turn to more serious thoughts:

The farmer turning the heavy clay with sturdy plough,

The rascally shopkeeper, the soldier, the sailor

Who boldly sails the seas, all say they only do so

So as to retire in true idleness when they are old,

Having made a pile: just as their exemplar

The tiny labouring ant drags all she can together,

Adding what’s in her mouth to the heap she’s building,

Neither ignorant of nor careless of her tomorrow.

Though as soon as Aquarius freezes the turning year,

Wise creature that she is, she no longer forages,

Using instead what she gathered, while nothing stops you,

Nothing deflects you from riches, not scorching heat, fire

Winter, sword or sea, while there’s a man richer than you.

Yet what good is all that mass of silver and gold to you,

If, fearful, you bury it secretly in some hole in the ground?

Brass farthing.’ Yet if you don’t what’s the point of your pile?

Though you’ve threshed a hundred thousand measures of corn

That won’t make your stomach hold any more than mine:

Just like the chain-gang where carrying the heavy bread-bag

Over your shoulder won’t gain you more than the slave

Who lifts nothing. Tell me then, what difference to the man

Who lives within Nature’s bounds, whether he ploughs a hundred

Acre s or a thousand? ‘But it’s sweet to take from a big heap.’

Even so why praise your granaries more than our bins,

So long as we’re able to draw as much from the smaller?

It’s as if though you needed no more than a jug of water,

Or a single cup, you said: ‘I’d rather have the same amount

From some vast river rather than this little spring.’ That’s why

Raging Aufidus sweeps away riverbanks, and all those

Who delight in owning more than their fair share of wealth.

But the man who desires only as much as he needs,

Won’t drink muddy water, or lose his life in the flood. 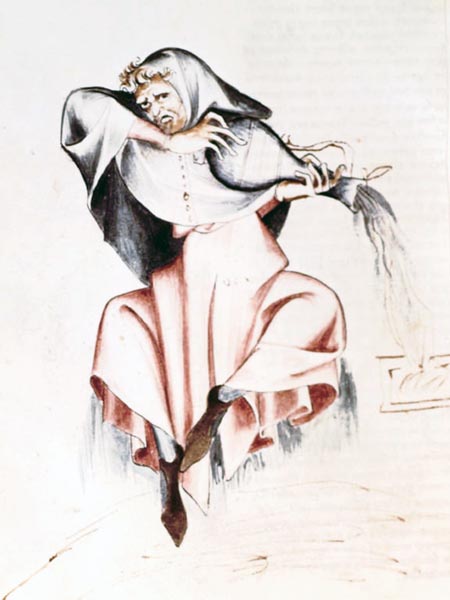 BkISatI:61-91 The miseries of the wealthy

Still, a good many people misled by foolish desire

Say: ‘There’s never enough, you’re only what you own.’

What can one say to that? Let such people be wretched,

Since that’s what they wish: like the rich Athenian miser

Who used to hold the voice of the crowd in contempt:

‘They hiss at me, that crew, but once I’m home I applaud

Myself, as I contemplate all the riches in my chests.’

Tantalus, thirsty, strains towards water that flees his lips –

Why do you mock him? Alter a name and the same tale

Is told of you: covetously sleeping on money-bags

Piled around, forced to protect them like sacred objects,

And take pleasure in them as if they were only paintings.

Don’t you know the value of money, what end it serves?

Buy bread with it, cabbages, a pint of wine: all the rest,

Things where denying them us harms our essential nature.

Does it give you pleasure to lie awake half dead of fright,

You of what you have, and run away? I’d always wish

To be poorest of the poor when it comes to such blessings.

‘But,’ you say, ‘when your body’s attacked by a feverish chill

Or some other accident’s confined you to your bed,

I’d have someone to sit by me, prepare my medicine

Call in the doctor to revive me, restore me to kith and kin.’

Oh, but your wife doesn’t want you well, nor your son: all

Hate you, your friends and neighbours, girls and boys.

Yet you wonder, setting money before all else,

That no-one offers you the love you’ve failed to earn!

Nature gave you without any trouble on your part,

Your effort would be as wasted as trying to train

A donkey to trot to the rein round the Plain of Mars. 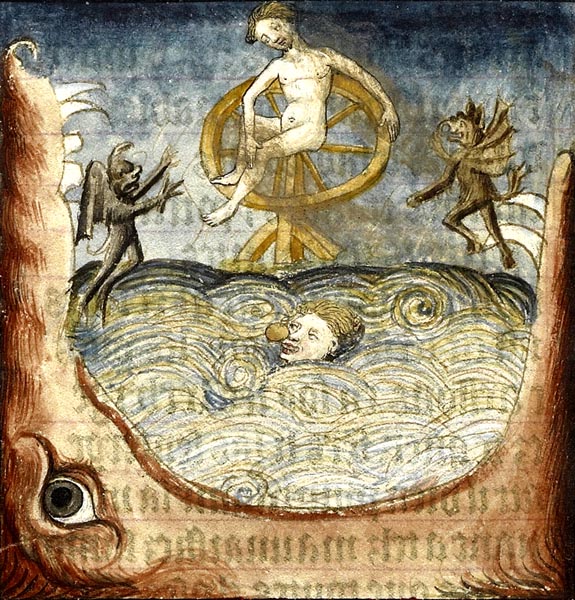 BkISatI:92-121 Set a limit to your desire for riches

So set a limit to greed, and as you gain more

Make an end of your labour, lest you do as did

One Ummidius. It’s not a long tale: he was rich,

So much so he was forced to weigh his coins: so stingy

He dressed no better than a slave: and right to the end

He was fearful lest starvation overcome him.

Instead a freedwoman cut him in two with an axe,

She an indomitable scion of Tyndareus’ race!

‘Do you want me to live, then,’ you say, ‘like Naevius

Or Nomentanus?’ Now you’re setting up a war

Of opposites. When I order you not to be avaricious

I’m not telling you to become an idle spendthrift.

Between Visellius’ father-in-law and Tanais

There’s a mean. Measure in everything: in short, there are

Certain boundaries, on neither side of which lies Right.

I return to the point I first made, that no one’s content

In himself, because of greed, but envies all others

Who follow different paths, pines that his neighbour’s goat

Has fuller udders, and instead of comparing himself

With the poorer majority, tries to outdo this man and that.

But however he hurries there’s always one richer in front,

As when the galloping hooves whisk the chariots away

From the gate, the charioteer chasing the vanishing teams,

Indifferent to the stragglers he’s leaving behind.

A happy life, who when his time is done is content

To go, like a guest at the banquet who is well sated.

That will do. Lest you think I’ve pillaged the shelves

Of bleary-eyed Crispinus, I’ll add not a single word.

End of Book I Satire I