The Poetry & Prose of Charles Baudelaire

Selected Poems, Prose and Voyage to Modernity; a New Commentary on Baudelaire's Poetry

Illustrated with selected works of artists contemporary with Baudelaire. 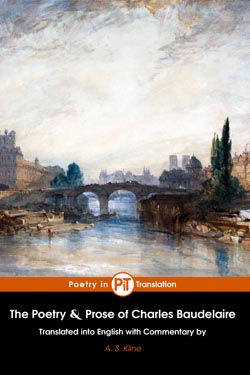 A new commentary on Baudelaire’s poetry.

Charles Baudelaire was born in Paris in 1821. His father’s death in 1827, and mother’s remarriage the following year, influenced both his emotional development and attitude to women. Educated in Lyon and Paris, he rejected an ambassadorial career for literature. His stepfather’s attempt to encourage the former, through the funding of an abortive1841 voyage to Calcutta, nevertheless fuelled the prevalent themes of travel and exoticism permeating his poetry.

Baudelaire was politically involved in the 1848 Revolution, but struggled throughout the 1850’s with ill-health and debt whilst working on his seminal translations of Edgar Allan Poe and his major collection of poetry Les Fleurs du mal, published in 1857. He was an influential art critic, championing the works of Delacroix, and is credited with coining the term ‘modernity’ to mark the transformation of human life caused by the Enlightenment, the Revolution, and the industrialisation and increasing urbanisation of his day.

Baudelaire suffered a stroke followed by paralysis in 1866, and subsequently died in Paris in August 1867.