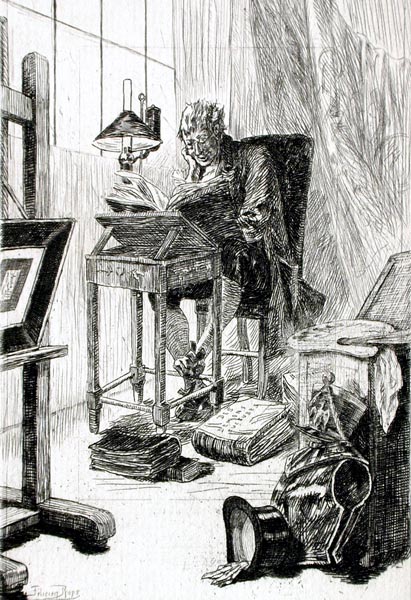 Translated by A. S. Kline © Copyright 2010 All Rights Reserved

From Moral: Hideous Nature, stripped of yesterday’s radiance, resembles the melancholy debris of a banquet.

Balzac clearly thought that man’s greatest disgrace and keenest suffering is the surrender of his will-power…the notion of letting his thoughts pass beyond his own control shocked him deeply.

He who has recourse to a poison in order to think will soon be unable to think without poison.

Magic makes dupes of them, shedding upon them a false happiness and an illusory light, whereas we, the poets and philosophers, have redeemed our souls, by unremitting toil and by contemplation.

From III: Nevertheless genius is simply childhood rediscovered by an act of will.

So the lover of the life of the universe enters into the masses as into a huge reservoir of electrical energy.

From IV: Modernity is that which is ephemeral; fugitive, contingent on the occasion; it is half of art, whose other half is the eternal and unchanging.

From XI: Everything beautiful and noble is the result of reason and thought.

From I: What the Mind creates is more living than Matter.

From XI: Those great, resplendent ships, imperceptibly swaying (rocked) on these tranquil waters; those sturdy vessels with their air of idleness and nostalgia, surely they ask us in a mute language: ‘When do we set sail for happiness?’

From XII: Hence it follows that irregularity, which is to say the unexpected, surprise, astonishment, is an essential part, and indeed the characteristic of beauty.

From XVI: I have discovered the definition of Beauty – of my Beauty. It is something ardent and sad, something a little vague, leaving room for conjecture.

From XVII: Inspiration always comes when a man wishes, but it does not always go when he wishes.

In certain almost supernatural states of the soul, the profundity of life is wholly revealed in the scene however mundane it may be that one has before one’s eyes. It becomes Symbol.

From XXII: I think the infinite and mysterious charm that lies in contemplating a ship, above all a ship in motion, is derived, in the first place, from its regularity and symmetry, which are among the primordial needs of the human spirit, and to the same extent as complexity and harmony; and in the latter case, of motion, to the continual generation and multiplication of all the imaginary curves and figures produced in space by the object’s real elements.

The poetic idea which arises from this process of linear motion is the concept of some vast being, immense, complex, but rhythmic; a creature full of genius, suffering and sighing with every human ambition and sigh.

From XII: A sense of solitude, from childhood. Despite my family, and above all among companions – the sense of an eternally lonely destiny.

From XV: Progress (that is to say, moral progress) can only be achieved within the individual, and by individual effort.

From XXXV: What is tedious about love-making is that it is a crime where one cannot do without an accomplice.

From XLIV: Fame is the result of the accommodation of a personality to the national foolishness.

From LII: To be a great man and a saint to oneself, that is the one important thing.

From LIX: Nomadic peoples, shepherds, hunters, farmers, even cannibals may be superior, because of their energy and personal dignity, to our Western races.

From LXV: It is this horror of solitude, this need to forget the self in another’s flesh, that mankind so nobly terms the need to love.

From LXXI: To copulate is to aspire to enter into another – while the artist never emerges from the self.

From LXXIII: While still a child, I had two contrasting feelings in my heart, life’s horror and life’s ecstasy.

From LXXXI: Everything in this world sweats crime: the newspaper, the wall, the face of mankind.

From LXXXVIII: In the moral as in the physical, I have always sensed the abyss – not simply the abyss of sleep, but that of action, dream, memory, desire, regret, remorse, beauty, number….

I cultivated my hysteria with terror and delight. Now I suffer from a continual dizziness, and today, January 23rd 1862, I had a dire warning: – I felt the breath of the wing of imbecility pass over me.

From LXXXVIII: …to consider this present moment as the most important of all moments….

From LXXXIX: No task is a long one but the task on which one dare not start.

V: From The Brussel Journal

From IV: The child and the artist constantly find new themes in a single image.

From XXXIX: November 10th, 1864. Until I receive proof that in the real struggle (against Time) I am bound to be defeated, I will not allow myself to say I have made a failure of my life. All the same….

From XLIII: The re-creations of past ages are always false in this respect, that there is no life at their centre – everything has the same depth…

Prostitution is in essence a matter of lack of choice. Nevertheless the vocabulary and the aesthetic creed of prostitution always try to give the impression that choice is somehow present.

I like to imagine an art where the quality of permanence would be replaced by that of the provisional, an art constantly applied to life. Theatre; sunlight; dancers; and the dance.