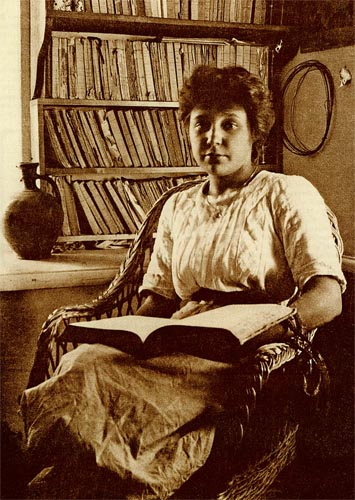 Translated by A. S. Kline © Copyright 2021 All Rights Reserved

This work may be freely reproduced, stored and transmitted, electronically or otherwise, for any non-commercial purpose.
Conditions and Exceptions apply.

You who still dream deeply,

If you should love my poetry.

Oh, how sunlit and how starry,

I beg you, before it’s too late,

Come see our house, at once!

A world that will be ruined,

Gaze at it secretly,

While the house is not yet sold,

Our poplar! In the evening

We children huddle there;

Quick! Make our house your goal,

To this soul out of my soul.

Whose corners are moist and deep.

There are women – their hair a helmet,

Desire my soul, that of a Spartan child?

No thought, no complaint, no argument.

No longing for the sun, the moon, the sea.

No sense of the heat of these four walls,

No longing for the gift desired,

No pleasure in the morning, in the tram’s

Not seeing the day, forgetful, I live,

Nor yet the date, nor the century.

I seem to tread a fraying tightrope,

I – a little dancer,

I – a shadow, of another’s shadow,

I let my head drop in my hands,

And brood: staring at the night.

No one, leafing through our letters,

Could comprehend the depths of them,

How treacherous we were, that is –

How true we were to ourselves.

Nothing’s been taken from us!

It’s sweet to me that we’re apart.

I kiss you – across a hundred

I know our gifts to be – unequal.

For the first time my voice is quietened.

What could you want – young Derzhavin,

With my unsophisticated verse!

You place your trust in fearsome flight:

Unhurried, you bear the sun –

Is my young gaze so heavy?

None has gazed after you so…

I kiss you – across a hundred

Not the first – to stroke those

The stars rose and faded,

Before my very eyes.

Never yet heard, such hymns

In the darkness of night,

To the breast of the singer.

What to do with it, my lad,

With eyelashes – none longer?

A strange malaise afflicted him,

And a sweetness overcame him,

Standing, gazing at everything,

Seeing neither the stars, nor dawn

With the watchful eyes – of a child.

And in sleep – eagles came to him,

Quarrelling over him wondrously.

And one – the lord of the cliffs –

Tousled his curls with its beak.

And mouth half-open – he slept:

Your name – a bird in the hand,

Your name – ice on the tongue.

One swift movement of the lips.

A ball – that’s caught in flight,

In the mouth jingling silver.

A stone, thrown in a quiet pond,

At night a light clatter of hooves,

Your name a noisy rumble.

We name your noble brow

Your name is – oh, impossible!

A kiss on the eyes – your name,

In this tender, chill, frozen time.

Your name is – a kiss in the snow.

At the core is a blue gulp of ice.

Sleep soundly – with your name.

After a sleepless night, the weakened flesh

And you smile at people –a seraphim.

After a sleepless night, the weakened hands

Are deeply indifferent to enemies, friends.

There’s a rainbow in every random sound,

And the sudden scent of chilly Florence.

Your lips have a brighter sheen, the shadows

This noble face – and, with night’s darkness,

One thing alone is darkening, yet – our eyes.

My Name is Marina

Some are made of stone; some made of clay –

But I am made of silver and sunlight!

Treason is – my trade; my name – Marina,

I am the mortal foam of the sea.

Some are made of clay; some made of flesh –

Theirs the coffin and the tombstone…

I was baptised in the sea’s font – and

In flight – I am eternally breaking!

My headstrong will must penetrate.

From me – do you see these wilful curls?

No earthly salt, ever, will be gained.

Pounding hard on your granite knees,

With each wave – I shall resurrect!

The high, the rising foam of the sea!

I know, I’ll die in the half-light! In which of the two,

At which of the two, will not be in my command!

Of, if only my torch might be extinguished twice!

So I could depart with the dawn and the sunset.

Her skirt filled with roses! Not breaking a stem!

I know I’ll die in the half-light! In hawkish night,

God will not choose to summon my swan’s soul.

My gentle hand pushing away the un-kissed cross,

I’ll rush into the generous sky, to that final greeting.

In the early twilight – answering with a broken smile…

– To the last death-rattle, I remain a poet!

Was it not you,

The rustling of her dress –

Was it not this,

This head full of silvery sound,

I’m no prettier for these years of separation!

Will you not be angered? By rough hands,

That have grasped for black bread and salt?

– The partnership of common labour?

O let’s have no preening for a meeting

Of lovers! – No scorn of my common

A chronicle of my scattergun speech.

A disappointment? Say it, fearlessly!

– Torn from friends, from affectionate

Spirits – in a chaos, harbouring hope,

Eurydice – to Orpheus (Tsvetaeva – to Pasternak)

Those abandoning their last ragged

Covering (no speech, no breath…!)

Oh, do you not exceed your powers,

Orpheus, in descending into Hades?

Those abandoning their last earthly

Ties…on a bed of lies they lie

And contemplate the great lie –

In sight – a meeting with the knife.

I have paid – for all these roses of blood,

As far as the Lethean upper reaches,

Beloved – it is peace I need,

Forgetfulness…for in the house of spirits,

Here –your ghost exists, yet is real –

I am dead…what can I tell you, but:

‘You must depart now, and forget!’

I’ll not be stirred! Not be drawn to you,

Has put an end to female passion.

I have paid – remember my moans! –

For this final spaciousness.

Nor for a brother to disturb a sister.

Rock me to sleep, starry boat!

My head’s tired of the waves.

Too long I’ve sought a mooring –

My mind weary of feelings:

My head’s weary of these games.

Let me lie on pine-needled grass –

My mind’s tired of these wars.

A Meeting of Minds (For Pasternak)

In a world, where all

Are stooped and sweating,

I know – you alone

In a world, where so many

I know – you alone

Is slime and spit,

Are a match for me.

Poem for My Son

Our conscience – is not yours!

Children, write your own story

Of your passions and your day.

Children! – You must settle

Your own score with Sodom’s –

Hail. Not at war with your brothers,

It’s up to you, my curly-headed boy!

Yours the land, the age, the day, the hour,

Ours the sin, the cross, the quarrel, ours –

The rage. Dressed in an exile’s

In that Eden, in which you’ve

Never lived! Among fruits – and views

Who lead you to perform such rites,

For a people who eat

The bread that you’ll be given – once

You’ve left Meudon – for the Kuban.

Of your own day.

I’ve not sought revenge, and never will –

Nor have I forgiven, nor will forgive –

From the day my eyes opened – till the oak

No: I’ve fought in vain: against none.

Nor have I forgiven: a single thing.

Stale – the taste of bread.

Whatever I reach for.

…Mine was the bread,

And mine the snow.

The snow’s not white.

Last Poem (On meeting Tarkovsky in the prison line)

‘I laid the table for six...’ Arseny Tarkovsky

Everyone repeats the first line,

Everyone passes on the word:

‘I laid the table for six…’

Yet you forget one – the seventh.

Mirthless the six of you.

Down your faces – the rain streams…

How could you, at such a table,

The unnamed the most disconsolate of all.

Ah, they fail to eat and drink!

– How could you forget their number?

How could you err in the sum?

How could you, dare you, not know

That the six (two brothers, a third –

You yourself, wife, father, mother)

Are seven – since I am here on earth?

You laid the table for six,

Though the sixth is not yet dead.

As a scarecrow among the living,

(With them) …timid as a thief

I sit, the uninvited seventh.