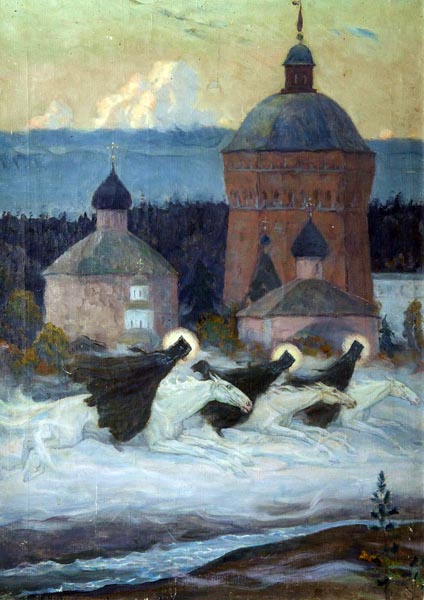 ‘Riders. An Episode from the siege of Troitse-Sergiyeva Lavra’
Mikhail Nesterov, 1932
Wikimedia Commons

Translated by A. S. Kline © Copyright 2022 All Rights Reserved

This work may be freely reproduced, stored and transmitted, electronically or otherwise, for any non-commercial purpose.
Conditions and Exceptions apply.

Innokenty Annensky (1855-1909), born in Omsk but raised and educated in Saint Petersburg, was a poet, critic, scholar, and translator. Scarcely published as a poet in his lifetime, his career was spent as a professor and administrator, a translator of classical Greek (in particular the plays of Euripides), and the author of numerous essays and reviews, in Tsarskoe Selo (the site of an imperial palace and township, fifteen miles south of Saint Petersburg). The poet Nikolai Gumilev (the husband of Anna Akhmatova) graduated from the school of which Annensky was the director, and called him ‘the last of Tsarskoe Selo’s swans.’ Praised initially by the Symbolists, the clarity, imagery and mood of his poetry later inspired Gumilev to form the Acmeist group, which included Akhmatova and Osip Mandelstam.

The Bow and the Strings

‘How dark and deep the delirium!

How clouded the moonlit height!

To be close to the violin so long

Yet not know the strings in the light!

Who summons us now? Illuminates

The bow felt something, suddenly,

Seize them both, unite them, again.

‘Oh, so long apart! Tell me one thing

In the darkness: are we no less?’

As the strings pressed closer, touching,

Sounding, trembling, in that caress.

‘Is it true? Yes? Separation enough!

Shall we part not, and so remain?’

And the violin too sighed ‘Yes’

Though its heart was gripped with pain.

The bow understood, and was still,

Yet, on and on, the note sounded,

What seemed music to others, to them,

Was torment and ruin unbounded.

Not till dawn were the candles quenched;

The strings, all night…sang on, instead…

And the dawn found them, there alone,

Drained, on their black velvet bed.

Whether a fiery heat hangs here,

Or the foaming waves run free,

Twin sails of the one vessel,

We are filled by the one breeze.

A storm of longing poured over us,

With its retinue of mad dreams,

Yet fate has silently drawn a line,

Forever, between us, it seems.

Where all is dark, and borne darkly,

In the starless southern night,

Over the avenue, a black sky descending,

Heart fails to conquer its lassitude, its pain…

Of the dream, is this all that shall remain?

Oh, her satin gown, its melancholy!

How sad I felt for her gaze, her pleadingly-

What depths of the soul were scattered there;

Dispersed among the restless, and unmoved!

What starlit sounds, nurtured in the silence,

As, at times, an agitated string will snap,

And tender, ardent, beneath the lunar rays,

Amethysts roll into the dew-wet grass,

Among the worlds, the one bright sphere,

One star’s name alone I utter,

It’s not that to me she is dear,

It’s that I pine amidst the others.

And, when I’m torn with doubt, alone

It’s to her, I pray, for clear sight.

It’s not that she shines brighter,

Rather, with her, I need no light.

I knew: She would return,

To be with me – Anguish.

With that tinkle and slam

Of the watchmaker’s lid.

He, who clicks the lid open,

To the swift whirring of wings,

Then uncouples it, ever.

Are they glad; is happiness close?

An end to their suffering…

They have so much to say,

Our friendship here’s a miracle.

Are only together a moment,

While the lid lifts on the sky.

It will tinkle, and slam,

And you’ll be far away…

In silence She will return,

To be with me – Anguish.

When the crimson day kindles,

When the blue with flame is kissed,

How often I summon twilight,

The cool twilight of amethyst;

And, that the amethyst’s facets

I let only a candle flicker here,

Dissolved, in its liquid gaze,

A gleam, ever reassuring

That somewhere, past simple connection,

Did my sad heart, that languishes,

In craving the storm, not bow

To the white, the crimson flashes?

The world’s gaze of weariness.

All that constitutes azure

Has poured itself out in streams.

Beneath ripples of gold, embroidered;

All that’s free of storm-filled dreams,

With tenderness in its look, is seen

To have drenched the garden’s green.

Through that turquoise glass

As if from a foreign domain…

None of its harsh displays,

Did you love? Do you forgive?

The shadows roam, and the shades plead:

Though from this silvery moonlight

Where then, where can they go?

Clings to the window-glass…

Shadows, shades, leave but this one,

Leave but this one, and pass!

She is silent, motionless,

In the coils of her braided hair…

I am faithful yet, to her silent song,

As in delirium’s despair,

On the steps to the garden’s gravel,

Speak of my guilt, error’s flight,

While the panes of the gallery

Are, as yet, dark with the night.

The wind an unbearable whine…

Yet, if you listen still, forget

The creak of the shattered pine!

Behind the gloomy candle, there

Gaze at the black window-glass;

Refuse to think, if you can,

Refuse to think of what’s past.

Winter will not concede: it’s harsh!

Or it’s hours of that lyre, and this

Thing hanging above us the while?...

No word, no response, no greeting,

My thoughts, failing question or answer,

Weigh fearfully on the heart.

Amidst hours of longing and anger,

The past truly fades without trace,

Four had not yet struck… yet, as soon

As the pale sun gilded the domes above,

Its motion involving such tenderness,

Yet snow filled the peaks, the dead plain,

And, all night, the breakers’ hiss severed

The rays stretched, between earth and sky…

And, near dawn, someone, dispelling dreams,

Hissed we were doomed, gave a muffled cry…

As night rolled by, failure the sole sensation…

In the silence, of a bracelet,

A dread of stolen happiness –

I drink greedily, ever,

Only your presence stirs,

The creak of snow, a gleam,

Fogged patterns made by chance,

On the glass, warm consonance

Of lips, and lilac, and furs.

I could love chill winter

Say ‘yes’ to its heavy burden…

From which not even smoke

Can rise to the clouds.

But I love the snow enfeebled

By the heavens above –

Those banks of lilac…

And all above, in thaw…

As, freeing the heights,

There, on the slippery slopes.

And the spray flying, high and cold.

But mistier are the fumes of poison.

And yet our hearts, oppressed, are silent…

You’ll take the cup, untasted, from my lips,

Because the lights are misted now…

The sun’s rays are quenched in the shadows,

On the sand, in the garden filled with dream.

All in you is sweetly-incomprehensible,

Yet I recall your words: ‘I’ll come to you.’

Black smoke, but you are airier than smoke,

And more tender than the down on a leaf,

Though I know not by whom you are loved;

You’re dreamed, though I know not by whom.

The diamond lights will not descend

Only the scented stock is spread around,

I remember that night, an endless dream,

But it was not I that languished and longed.

In the lamp on the birch-tree, forgotten,

The melting wax, it was, wept and burned.

Scent Of The Lily

The scent of the lily weighs on me,

Because, within, lurks secret decay.

Simply, to drink it in, undistilled…

I’ll love her mirage in the smoke…

And the imperishable flowers

Of fire, I alone will see as blue.

No flower-like stars in the misted sky;

None alight in this diffident evening…

Though languid firs gleam on the glass,

And all around us the snow-gusts pass.

The flakes that fall on your eyelashes

Stop you seeking my eyes, gazing,

Tears indeed, yet not scorching my heart,

Stars indeed, yet weary of shining…

Such is love’s mad resentment,

Stars drowning against their will…and I,

In pain, I envy those flakes of snow,

Knowing it’s through them that you cry…

Triply magical is my prism:

Beneath its first crystal face –

Though you see the fires no more

If you turn to the second face –

There pale hands are outstretched

If you view the final face –

Neither clasped nor parted hands…

Though no brighter colours exist

Than that rainbow, torment ended!...

If confined – it stupefies too.

To be smoke – yet born anew.

Hears you, embraces you silently…

To be shade! – Joined, in the dark and light.

On, and away, flew the melting snow,

I’d not thought the moon so small,

Nor the clouds so misted, distant.

I’ll leave, I’ll ask for nothing at all,

Since it seems my fate’s set on high.

I’d not thought the moon so lovely,

So lovely, so troubling, in the sky.

Close to midnight. No-one and no-one’s,

Tired most by the spectre of life, I stand,

And gaze at the misted moonbeams there,

Yet, in the net of bare branches,

The pale blue was never colder,

Never sadder the tatters now, that I

To see all, finally, numbed…

Strangely new the air to me…

I thought it would prove more painful, to find

The clouds whiten now in the bluish dome,

The leafy crowns clear, as yet, in the heights,

But dusk is gleaming, the shadows grow long;

In the heart, from afar, a phantom alights.

Was the tale forever (who knows?) brief as this;

Or perhaps the latter half I forgot to read?...

The clouds extinguished in the pallid dome,

They have become – the bench, its occupant, now,

In the motionless twilight, heavier; dire the gleam.

Don’t move – the carnations will glisten and bow,

The bushes dissolved in the air, merge, and pass,

And the Bronze Poet, free of oppressive dream,

Leap from his pedestal onto the dew-wet grass.

Are painfully merged in you, I find.

While, amidst hints of rare beauty,

None is subtler, none is more refined…

Where all is mirage, you feel love’s powers,

All its unresolved dissonances,

Amidst the restless stir of the flowers.

Our ideal, you torment us too,

Among these spaces pale and empty;

So recklessly, so unrelentingly,

It’s impossible, once having loved you,

Not to love you ever more madly.

Only those whose sleep is concealed,

The curtain across my window

If you’re true to the dream, you will come.

Are you truly that one?

I sense: the garden’s there, the lilac’s there,

All is good in the fiery blue,

In the fresh rustling,

Yet, the charms of bright enchantment

Are, to me, the strangest thing…

The bees make honey in the hive,

Drunk on the flowers…

The heart is only alive,

In dream, in the starlit hours.

Beneath ringing copper – it goes,

The coffin, on its way,

Does it want to draw breath, there,

Into that empty chest?...

The last snow, white but sombre,

Muddy the road, at best.

Only a sprinkle, turbid,

Poured in decay, the sigh

Gazing into the fish’s eye…

Then, over the numb clearing,

The birds, on swollen wing…

Mankind! Your road is mud,

These ruts are your last breaths;

While nothing proves sorrier

Than the meeting of two deaths.