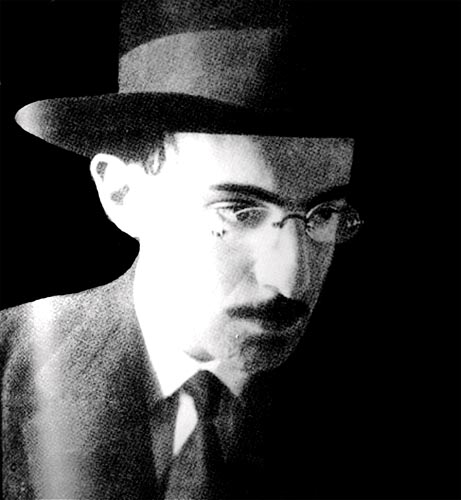 Everything that a human being expounds or expresses is a note in the margin, of a text that has been totally erased.
From the meaning of the note, we, more or less, discern the meaning the text may have contained;
but there is always a doubt, and the possible meanings are many.

Translated by A. S. Kline © Copyright 2018 All Rights Reserved

The poet is a pretender,

who pretends so completely

he even pretends to pain

the pain he really feels.

And those who read what he writes,

neither of those pains he has,

but what they themselves have not.

So round its track goes

wheeling, to entertain our reason,

this string of carriages

they call the heart.

The innumerable live in us;

when I think or feel, I do not know

who it is thinks or feels.

I am merely a place

of feeling or thought.

I have more souls than one.

There are more I’s than myself.

indifferent to them all.

I silence them: I speak.

of what I feel or do not feel

dispute inside who I am.

I ignore them. They dictate nothing

to the one I know. I write.

that is and contains nothing

nostalgia for nothing at all,

the desire for something fine.

I am enveloped by it

as if by a fog

and I see the last star glowing

above the stub in my ashtray

I smoked life away. How uncertain

all I saw or read!

And the whole world, a vast open book,

smiles at me in an unknown language.

They say I pretend, I lie

I simply feel with

Not using the heart.

All that I dream, that passes,

that I lack or that ends,

overlooking some other thing.

It is that which is beautiful.

That is why I write amidst

that which is not nearby,

serious about what is not.

There Was A Rhythm

There was a rhythm to my sleep.

When I woke it was lost.

Why did I leave that abandonment

of myself, in which I lived?

I don’t know what it was that was not.

I know it rocked me gently,

as though the rocking sought

to turn me, once more, into who I am.

There was a music that ended

when I awoke from dreaming.

But it did not die: it endures

in that which stops me thinking.

That Which Pains Me

That which pains me is not

what is in the heart,

but those beautiful things

that will never exist…

They are the forms without form,

that pass without pain

having power to know them,

or love to dream them.

They exist as though sadness

were a tree and, one by one,

between its vestige and the mist.

Rather The Flight Of The Bird

Rather the flight of the bird, that passes and leaves no trace,

than the passage of the animal recorded in the earth.

The bird goes by and forgets, and so it should be.

Where it no longer exists, and so serves no purpose,

the animal shows it has been, which serves no purpose.

The record left behind is a betrayal of nature.

Because the Nature that was is not Nature.

What has been is nothing, and to record is not to see.

Pass by, bird, pass by, and teach me to pass by!

Beyond The Bend In The Road

Beyond the bend in the road

there may be a well, a castle.

There may be simply more road.

I neither know nor ask.

As long as I’m on the road before the bend

I simply look at the road before the bend,

since I can see only the road before the bend.

It would do no good to look elsewhere

Let’s just concentrate on where we are.

There’s beauty enough in being here, not elsewhere.

If anyone’s there beyond the bend in the road,

let them worry about what’s beyond the bend in the road.

That is the road, to them.

Now we only know that we’re not there.

there’s the road with no bend at all.

It fell, irretrievably, down the stairs.

It fell from the hands of the careless girl.

It fell, into more pieces than there was china in the vase.

I’ve more sensations than when I felt like myself.

I’m a scatter of pieces on a mat that needs shaking.

I made a sound in falling like a breaking vase.

All the gods there are lean over the stair-rail

and gaze at the pieces the girl made of me.

They are not angry at her.

What was I but an empty vase?

They look at the absurdly conscious pieces,

conscious of themselves, not of them.

They gaze and smile.

They smile, indulgently, at the unwitting girl.

One piece shines, its glossy exterior outwards, between the stars.

My work? My ultimate soul? My life?

And the gods gaze, at it especially, not knowing why it hangs there.

Between Sleep and Dream

Between sleep and dream,

Between me and what in me

is the I that I suppose

runs a river without end.

It passed by other banks,

on the wandering course

It arrived where I live

at the place I am today.

It passes, if I meditate on myself;

waking, it has passed by.

And the one I feel I am, and dies

in what binds me to myself,

sleeps where the river runs,

the river without end.

I Am A Shepherd

I am a shepherd.

The sheep are my thoughts

and all my thoughts sensations.

I think with my eyes and ears,

my feet and hands

my nose and mouth.

To think a flower is to see it, and smell it,

and to eat a fruit is to know its meaning.

sad at enjoying it so much,

I lie flat in the grass,

I close my hot eyelids,

I feel all my body, lying down in reality,

I recognise the truth, and I’m happy.

In This World Where We Forget

In this world where we forget

we are shadows of who we are,

and the true expressions we form

in that other where, souls, we live,

are here grimaces and signs.

All is night and confusion

that exists among us here:

from the fire whose glow is hidden

when we look at what life gives.

But one or another, gazing

closely for a moment,

can see in the shifting shadows

the intent in the other world

of the expression that makes them live.

And then they find the meaning

of what here is merely a grimace,

and their intuitive gaze

returns to their body, lost,

Shadow of the yearning body,

it pretends it feels the tie

that binds it to the marvellous

truth that hurled it, anxious,

to the floor of space and time.

It flows, indecisive in the mist,

more than the indecisive mist,

a being that is something to discover,

and for which nothing is needed.

It only wishes to consist

of being the nothing that surrounds it,

a beginning of existence

completed before it is grasped.

It is the meaning that exists

in the breeze that is scarcely felt,

the essence of which consists

in passing by, uncertainly.

But no, she’s abstract, she’s a bird

of sound turning in the air, of air,

and her soul sings without hindrance,

for singing is what makes it sing.

My body’s the abyss between I and I.

If all’s a dream beneath the irreal dream

of open sky, to dream yourself is to possess yourself,

and to possess yourself is to dream more closely

bodies are the dream of a bridge

over an abyss without shores

I, because I know myself, separate myself

The hour goes by. But my dream is mine.

There Is For Everything We Do

There is for everything we do

It is not what we want.

It is done because we live,

and living is not thinking.

If anyone thought about life

they would die of thinking.

That is why the life that is lived

is a thing forgotten

between moment and moment.

But it’s no matter that it is,

or even that it’s been allowed to be:

it’s bad that our mood controls us;

it’s good that no one sees us;

between them, stay alive.

I Took Off The Mask

I took off the mask and saw myself in the mirror –

there was the child, of so many years ago.

That’s the advantage of knowing how to take off the mask.

One is always the child,

the past that was

I took off the mask and put it on again.

Thus, I am the mask.

And I return to personality as to

a station at the end of the line.

Say nothing to the one who told you all –

that all, the all that’s never told…

those words made of velvet

whose shade of colour no one knows.

Say nothing to one who bares their soul…

the soul that cannot be bared. Confession

is indulged in simply to win calm

from listening to ourselves talking.

All useless, and false.

It’s a spinning top a boy in the street

sets going to see how it spins.

It spins. Say nothing.

No One Loves Another

No one loves another, rather they love

whatever of themselves is, or is imagined,

in the other. Don’t grieve if no one loves you.

They feel who you are and you’re a stranger.

Be who you are, loved or not.

Take me into your arms, O eternal night,

and call me your son. I am a king

my throne of weariness and dreams.

My sword, weighing my tired arms down,

I surrendered to calm and powerful arms,

and I left my crown and sceptre – shattered

to pieces, in the anteroom.

My coat of mail, utterly useless,

my spurs with their futile jingle,

I left behind on the chill staircase.

I shed royalty, body and soul,

and returned to Night, ancient, calm

as a landscape in the dying light.