Tacitus: The Agricola and Germania

With selected illustrations by various artists. 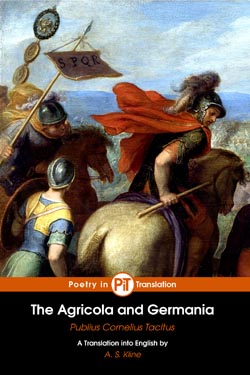 Tacitus’ early work Agricola, written c. AD98, is a biography of his father-in-law, Gnaeus Julius Agricola, covering the noted general’s early life and his Governorship of Britain. Essentially a eulogy of a strikingly honest and capable Roman official, the work allows Tacitus to indulge in a quiet critique of Imperial Rome’s control of the Empire under Domitian, with digressions regarding the geography and ethnography of Northern Britain. The emphasis is on the life of a virtuous soldier and official navigating through the difficult ocean of power politics, rather than on pure history and the details of provincial rule, but the Agricola is nevertheless a valuable contribution to our understanding of the period.

The Germania, written about the same time as the Agricola, is a description of the lands, manners and customs of the German people and the individual Germanic tribes, as they were understood by the Roman Empire. Tacitus is generally favourable towards the legal, moral and religious codes of the people he is describing, but is equally ready to decry what he sees as their vices and failings. The result is a seemingly well-balanced view of a region which caused Rome much trouble and effort to bring under stable control. Like the Agricola, the Germania provides information, mostly derived at second-hand by Tacitus, concerning the largely obscure northern Empire, whose history and geography at that time we would love to know more about; information which has subsequently led to both sensible and not so sensible extrapolation and speculation from the limited amount he has to tell us.

Publius Cornelius Tacitus was born AD56/57, in one of the Roman provinces, possibly Gallia Narbonensis, to an equestrian family. He studied rhetoric in Rome, and in AD77 or 78 he married Julia, the daughter of the noted general Agricola. He held various posts under the Flavian Emperors, surviving the reign of Domitian, an experience which left him with the deep aversion to tyrannical government evident in his writings. He was a Senator, and a Consul suffectus in 97 under Nerva, gaining a high reputation as both lawyer and orator. Leaving public life he then turned to literature, though returning to practise law under Trajan. He was a close friend of Pliny the Younger, who assisted him in his early career. His major historical work survives as the Annals and the Histories, the extant parts of which cover large sections of the period from Tiberius to the death of Nero (the Annals, the later work), the Year of the Four Emperors, and the founding of the Flavian dynasty (the Histories). In AD112 or 113 he held highest office as civilian Governor of the province of Asia, and may have lived until as late as AD130.

Translated by A. S. Kline © Copyright 2015 All Rights Reserved