There is nothing more erroneous than a man’s foolish convictions,

nor more foolish than sham severity.

Part I: Adventures of Encolpius and Ascyltos

The Satyricon is neither a Satyr play nor a satiric work, though it has flavours of both, but rather a Saturnalian medley, which pursues the misadventures of Encolpius, a runaway slave, amongst his friends and enemies. It mingles prose and verse, farce and fantasy, life and philosophy, in a delightful and amusing blend, to grant us an insight into Rome at the time of Claudius and Nero. The whole work, of which sadly only part is extant, can be seen as a celebration of the god Priapus, and to that extent has its obscene moments, though they are mild and good-natured in tone. The simplicity of Petronius’ approach belies the sophistication of his parodies and the Satyricon would have been read and listened to with pleasure by the educated imperial circles of the nobility, as well as the literate middle-class. Many elements within it are seen again in later literature, and its influence can be felt especially in the picaresque works of later times, for example those of Rabelais, Fielding, Sterne, and in Byron’s Don Juan, as well as in theatrical farce, while, in Trimalchio, Petronius creates one of the great comic characters of fiction. 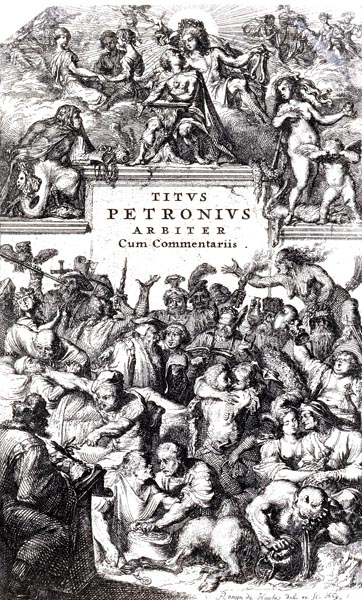 Petronius Arbiter (Gaius, or Titus) who is usually accepted as identical with the author of the Satyricon, flourished at the time of the emperors Claudius (AD41-54) and Nero (AD54-68), and Tacitus speaks of him in the Annals, where he describes his suicide after condemnation by Nero. At one time Governor of Bithynia in Asia Minor, Petronius later became Nero’s close friend and his arbiter of taste and manners. He appears to have indulged freely in the dubious life of Nero’s court, yet in the Satyricon reveals a keen awareness of the wider society around him with its weaknesses and follies, as well as his own educated background in Greek and Roman literature, lore, and philosophy. The Satyricon is one of the very few light-hearted prose works from the Roman period and, with Apuleius’ The Golden Ass, helped to found the picaresque tradition which later European literature adopted and embellished.

Copyright © 2018 A. S. Kline, All Rights Reserved
This work MAY be FREELY reproduced, stored and transmitted, electronically or otherwise, for any non-commercial purpose. Conditions and Exceptions apply.