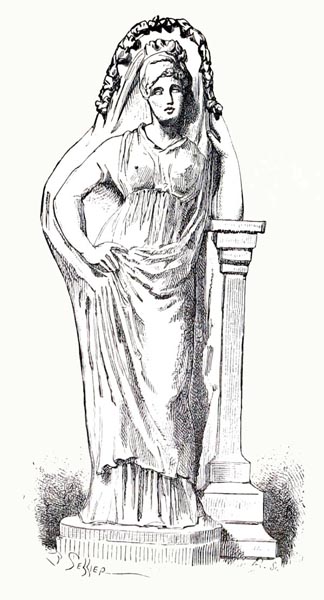 Translated by A. S. Kline © Copyright 2017 All Rights Reserved

In the consulate of Rubellius and Fufius (AD29), both surnamed Geminus, occurred the death of Livia, in extreme old age, she being of the highest nobility through her Claudian ancestry and her adoption into the Livian and Julian houses. Her first marriage was to Tiberius Nero, by whom she had her surviving children. Exiled in the Perusian War (40BC), he had returned to Rome after the peace deal (the Pact of Misenum) between Sextus Pompeius and the Second Triumvirate.

Thereafter Augustus (Octavian), taken with her beauty, took her from her husband, she perhaps being not unwilling, in such haste that he introduced her to his home while she was pregnant not even allowing time for her confinement. After this she had no surviving issue, but the marriage of Agrippina (Augustus’ granddaughter) to Germanicus (Livia’s grandson) created a blood-connection to Augustus, such that they shared the resultant great-grandchildren.

She was of the old school in domestic virtue, though her friendships went beyond what the women of those times would have approved. A headstrong mother, she was an accommodating wife, well suited to handle her husband’s virtues and her son’s hypocrisies.

Her funeral was modest, her last testament long rendered null and void. Her great grandson, Gaius Caesar, soon to achieve power (as the emperor Caligula), delivered her eulogy from the rostra.

Book V:II Tiberius neglects to pay his last respects to her

But Tiberius, without the least change in his pleasant mode of life, excused himself, by letter, on the grounds of matters of state, from paying his last respects to his mother and, in the guise of modesty, reduced the lavish tributes decreed by the Senate in her memory, very few being retained, adding that she was not to be awarded divine honours, such being her own wish.

And indeed in a section of this very letter, he decried the friendships entered into by women, an indirect censure of the consul Fufius, who had flourished thanks to Livia’s favour, had an aptitude for attracting the notice of women, and was witty likewise, with a habit for ridiculing Tiberius in sharp pleasantries which are long remembered by the powerful.

Moreover, abrupt and oppressive tyranny now followed: for while Livia was still breathing she provided some recourse, for obedience to his mother was long-established with Tiberius, nor did Sejanus dare to question her authority as a parent. Yet now, as if loosed from restraint, they broke free, and a letter the public believed had been brought to Rome earlier but suppressed by Livia was sent, denouncing Agrippina and Nero Julius; it being broadcast not long after her death.

The wording was calculatedly harsh: though Tiberius accused his grandson not of planning armed revolution but of love affairs with young men and of lewdness. He did not dare to invent such charges against his daughter-in-law, but criticised her arrogant language and contumacious spirit, the Senate listening, in profound and fearful silence, until a few whose hopes lay not in honesty (even public misfortune being taken by certain individuals as an occasion for currying favour) demanded a motion be put, Cotta Messalinus being most prompt to offer a fierce opinion.

Yet among other leading men and especially the magistrates there was some trepidation: and indeed Tiberius, though hostile in his display of invective, had left the outcome ambiguous.

There was a certain Junius Rusticus in the Senate, selected by Tiberius to record the senators’ decrees, and therefore credited with insight into the emperor’s thinking. By some fatal impulse (since he had never before shown any indication of courage) or through a mistake in perception which blinded him to imminent, yet made him fearful of uncertain, danger, Rusticus joined with the doubters in warning the consuls not to table the matter; he argued that the slightest thing may affect the most serious issue, and that the extinction of the house of Germanicus might one day cause the old man regret.

At the same time, a crowd surrounded the Senate House, carrying images of Agrippina and Nero Julius, and cheering for Tiberius, cried out that the letter was false and that intentions shown against what was his own house were against his wishes. Thus nothing disastrous was perpetrated that day. Also fictitious attacks against Sejanus were even circulated in the name of the consuls, many critics exercising their extravagant wit anonymously and therefore all the more insolently.

This incensed Sejanus further and provided material for fresh charges: the emperor’s sorrow had been put to scorn by the Senate, the masses were in rebellion, he claimed. Already, disloyal speeches were given a hearing, incendiary decrees by the senators were being read: what was left but for them to take up the sword, and select their leaders and emperors from among those they followed, whose images adorned their banners?

So Tiberius, after repeating the scandalous charges against his grandson and daughter-in-law, and rebuking the people by edict, complained to the Senate that the imperial majesty had been publicly ridiculed through the delusions of a single senator, and demanded that the whole matter, as yet undecided, be left in his hands.

Without further discussion, they proceeded to announce not the final sentence (since that was forbidden them) but the readiness for the vengeance they were prevented, in accordance with the emperor’s command, from endorsing … 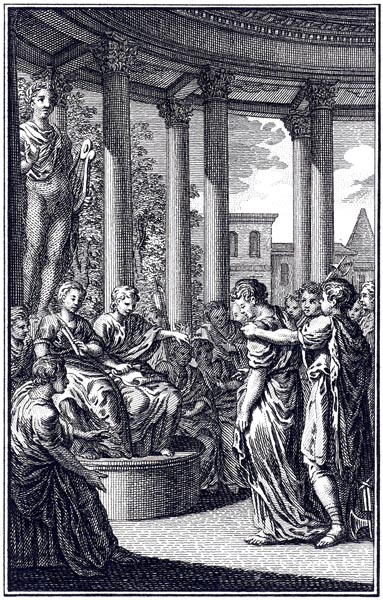 Book V:Translator’s note, the missing portion of the text

The remainder of Book V (and possibly a renumbered opening to Book VI) likely contained a narrative around the events listed below.

AD29. The trial and condemnation of Agrippina and Nero Julius, she being banished to Pandateria (Ventotene), he to Pontia (Ponza). Drusus Julius marries Aemilia Lepida.

AD31. Sejanus consul with Tiberius. Death of Drusus Julius. Sejanus falls under suspicion, and is overthrown by Tiberius, acting from Capri through his agents. Sejanus and Sejanus’ eldest son Strabo executed. Sejanus’ wife Apicata testifies that Drusus the Younger had been poisoned by his wife Livilla acting with Sejanus. Livilla is executed.

Book V is here concluded in the following sections, and Book VI is then taken as opening at the beginning of AD32.

Book V:VI Speech of one of Sejanus’ allies (unnamed)

…Forty-four speeches were delivered on the subject, a few out of fear, the majority out of habit…

‘…which I thought might contribute to my own disgrace or hatred of Sejanus. Fortune’s wheel has turned, and he who accepted Sejanus as his consular colleague and prospective son-in-law, absolves himself, while the rest, who fawned on him in dishonour, in their wickedness now attack him. Which is more wretched, to be accused of friendship or to accuse a friend, I shall not attempt to decide.

I shall neither satisfy the cruelty nor rely on the mercy of any man, but free and approved of by my own self, I will anticipate my sentence. You, I entreat to preserve my memory with as much joy as sorrow, and to add my name to those who escaped by an illustrious end from public injustice.’

He then spent part of the day detaining or dismissing his guests, according as each wished to speak with him or depart, and while a crowd were still present and all eyes were fixed on his intrepid features believing that some time remained before the end, he fell on the sword concealed in a fold of his gown.

Tiberius heaped neither accusations nor abuse upon the dead man, though he had once accused Blaesus of many foul things.

Book V:VIII The fates of Publius Vitellius and Pomponius Secundus

Next came accusations against Publius Vitellius and Pomponius Secundus, the former charged with offering up the keys of the treasury, of which he was prefect, along with the military fund, to the revolutionary cause; the latter charged, by the ex-praetor Considius, of harbouring his friend Aelius Gallus, who had hidden in Pomponius’ garden as his safest sanctuary after the execution of Sejanus. Their only resource in time of danger was in the constancy of their brothers, who stood surety for them.

Later, after endless adjournments, Vitellius, wearied in spirit, weighed down by a mixture of hope and fear, asked for a letter-knife, as if to undertake business, then nicked an artery and so ended his life.

Yet Pomponius, of refined character and notable talent, by treating adversity and good-fortune alike, out-lived Tiberius.

It was subsequently decided that Sejanus’ remaining children should be executed, though the mass anger had abated and the majority had been placated by the previous deaths. They were therefore carried off to prison, the boy (Capito Aelianus) aware of his fate, the girl (Junilla) so innocent that she kept asking what she had done wrong and where they were taking her, that she would not do it again and surely could be punished with a trivial beating.

Historians of the time say that as it was thought to be unheard-of for capital punishment to be inflicted on a virgin, she was violated by the executioner, the noose beside her; both children were then strangled and their young bodies thrown down the Gemonian Stairs.

At about that very time, Asia Minor and Achaia were troubled by a rumour, more potent than lasting, that Drusus Julius, the son of Germanicus, had been seen in the Cyclades and not long afterwards on the mainland. There was in fact a youth of like age, whom some of the emperor’s freedmen feigned to recognise. Through the deceit practised by these followers, the ignorant were attracted to him by the famous name, and the Greek readiness for anything new and strange.

For the story invented, and immediately believed, was that he had escaped from custody and was heading for the armies loyal to his father’s memory, intending to invade Egypt or Syria. Now rallying the young, now raising public enthusiasm for his cause, he was already elated by initial success and filled with vain hope, when news of the matter reached Poppaeus Sabinus, who was preoccupied with Macedonia but also responsible for Achaia.

Determined to run down this tale, whether true or false, hastening by the Gulf of Toroneos and the Thermaic Gulf, he soon left in his wake the Aegean island of Euboea, Piraeus on the Attic coast, then the Corinthian shore and the narrows of the Isthmus; and reached the Roman colony of Nicopolis (near Preveza, Greece) via the Ionian Sea.

There, he found that the youth, when interrogated further as to his identity, asserted that he was the son of Marcus Silanus, and that as many of his followers had slipped away he had boarded a ship said to be bound for Italy. Sabinus wrote to Tiberius, but I have no further information as to the origins or end of the matter.

Book V:XI Disagreement between the consuls

At the close of the year, a long-established discord between the consuls erupted. For Fulcinius Trio, always ready for a quarrel and experienced in the law-courts, censured Publius Regulus for his dilatoriness in seizing Sejanus’ agents. Regulus, retaining his self-control except under direct provocation, not only countered his colleague, but called for an inquiry as to his involvement in the conspiracy. Many of the senators begged them to lay aside an enmity bound to end in disaster, but they remained hostile and threatening to one another until they left office.