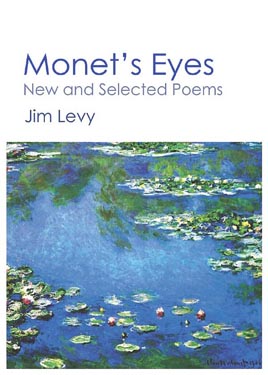 From Monet's Eyes, New and Selected Poems by Jim Levy

Epicurus' philosophy according to Diogenes of Oenoanda: a poem

In the second century A.D., Diogenes of Oenoanda, nearing the end of his life, carved a paean to the philosophy of Epicurus on the wall of a portico in the Greek city of Oenoanda in southern Turkey. Having completed it, he wrote a friend giving a summary of his message.

I write to tell you of the wall I’ve built

and the words I have inscribed on it,

that put before the world the wise thoughts

of Epicurus, who saw things as they are

and taught us how to live a happy life

of virtue, free of fear.

I speak of atoms, how they are all

and everywhere in motion,

more primal than the air or fire,

more original than earth or water.

Atoms while falling through the void

into the void, swerve and crash

into each other, and that blow

shocks them into life. They form

the crocus and the tulip

and ourselves and even gods.

I explain that pleasure is the goal in life.

I take that as my starting point.

By that, I mean, not the search

for wealth or power, the luxuries

and prizes most men seek,

not even honor, which is a word

that has no substance.

Gnawing at the bone of gold and status

only ends by serving institutions,

from a modest meal of simple food,

a wife if need be, and the pleasures

of the mind, reading, writing and creating art.

Study art and nature, but not philosophies

that trick the intellect with sophistry

and dialectic. Use your senses and your mind

to wonder and to understand the world

and how it works. Such knowledge leads

Fear the bear and scorpion

but not the teeth of time,

the stings of pain or death

or an afterlife of torment.

Pain is natural. If short,

endure it. If intense,

If prolonged, it will probably

that spreads from sheep to sheep

but there are sudden deaths

or soaking in a bath. Even better,

to die while sleeping, unaware

of uncollected debts and words unwritten.

Fear not. The body dies

but the soul – the soul dies too.

Epicurus said as much in simple language.

at death they die together.

Being dead is nothing. Once dissolved,

we are not, for what we were before,

we are again. That’s the good news.

There is no other.

The dead don’t rise from dirt

and wander through the town.

There’s no underworld of river,

or hell of fire. These are fables,

lies fed to us by priests to dupe

the wicked and the pious both.

There’s no punishment for bad behavior

or rewards for daily prayers.

Religion is a fiction, to comfort

or to frighten us. It is cruel, setting men

to torture men with whips and tongs,

but to no avail. She was a sacrifice to Artemis

so that some ships could sail.

The gods live in a vacuum

deaf to prayers, blind to what we do.

They are absentminded beings

who enjoy themselves indifferent

to our foibles and our fates.

Live without approval of the crowd

or illicit loves or slaves or perfumes

from the East. Live with moderation,

freely, in a state of lucid understanding

and acceptance. Enjoy your life

but do no harm to others or yourself.

Practice virtue for itself

and not for some reward.

and you will find it is

Please accept this letter as a gentle plea

to study Epicurus and his words,

for they are all you need

to live a happy life and die

Dear Antipater  Antipater and the letter are fiction.

all you need to live a happy life and die a peaceful death.
Epicureanism was defamed by Platonists and Stoics who saw it as a threat to their ideas. One of the words for heretic in the Talmudic literature is Apiqoros (Epicurus) and in the Mishnah, apiqorsim (Epicureans) are among the people who do not have a share in the World To Come. In Canto X of Dante’s Inferno, Epicureans are depicted as heretics suffering in the sixth circle of hell.

The Teachings of Epicurus, by M. J. Mattes

An original essay on the teachings of the Hellenistic philosopher Epicurus who applied rational, analytical thinking to practical philosophical questions. Epicureanism is older than Christianity by hundreds of years, and comparable in age to all of the major religions. Epicurus concluded that there is no afterlife of the human spirit (after the death of the body), and that there are no gods that control human affairs. He recognized that nature operates by consistent mechanisms, even though he did not understand what most of the mechanisms were, and that there were no miracles. In short, the concept of atheism is not new, but has an ancient and distinguished history. 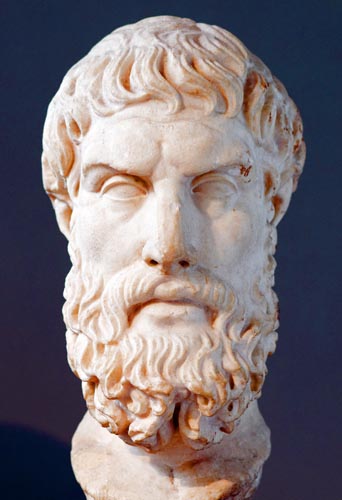