The Poetry of Rainer Maria Rilke

Selected Poems, Duino Elegies and The Fountain of Joy; a commentary on the Elegies

Illustrated with photographs of the sculpture of Auguste Rodin (France, 1840-1917). 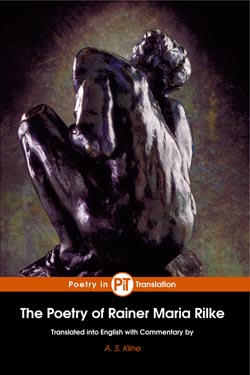 The ten Elegies in a new, complete translation.

The Fountain of Joy

A new commentary on the Duino Elegies.

From his complete works, including Requiem for a Friend, and extracts from the Sonnets to Orpheus.

Rainer Maria Rilke, was born in Prague, the capital of Bohemia, in 1875. He studied in Prague and Munich before travelling widely. In 1902 he arrived in Paris, where he subsequently became Auguste Rodin’s secretary. It was here that he developed the more objective style of his collection New Poems (Neue Gedichte, 1907).

During the winter of 1911/1912 Rainer Maria Rilke was invited to Castle Duino, near Trieste, where he began the Duino Elegies. The work would, however, remain unfinished for a decade. Creatively muted by bouts of depression, in part caused by the First World War, Rilke did not complete the Elegies until 1922. His Sonnets to Orpheus were written in the same year during a three-week paroxysm of creativity.

The Duino Elegies and Sonnets to Orpheus deploy and extend both his early lyrical gifts and subsequently more objective formal style in a poetry of philosophical and spiritual depth, centred around a view of life and death as forming a complete whole, and demanding a full human response to both the positive and negative aspects of both these ‘realms’. In that sense he is a poet of both darkness and light, of the bleak and sparse but also the spiritual and consolatory. Ideas from late nineteenth century existentialist philosophy, the influence of artists like Rodin and Picasso, and a subtle awareness of Psychology as a developing area of intellectual exploration, can all be found in his work, while his spiritual and poetic world is revealed as both highly individualistic and profoundly modernistic, despite its Romantic lyrical heritage.

Translated by A. S. Kline © Copyright, All Rights Reserved. Made available as individual works in the United Kingdom, 2001-2009, via the Poetry in Translation website. Published as part of the collection ‘The Poetry of Rainer Maria Rilke’, ISBN-10: 1512129461, May 2015.