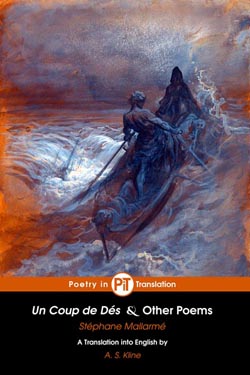 These translations of Mallarmé’s major poetry reflect his position as a leading Symbolist poet of the nineteenth century. His use of complex syntax, and subtle turns of phrase, often makes his verse seem more abstruse than its content indicates, revealing as it does a relatively narrow though sophisticated world, predominantly literary and philosophical in nature. Part of the charm of his poetry is his ability to create a rich and detailed edifice from the simplest of ideas, objects, or occasions. Philosophically he is associated with ideas of absence and emptiness, but also of a quasi-Platonic realm of forms inherent in that emptiness, though paradoxically his verse, which often attempts to realise the ideal essence of the perceived external reality, through its images, symbols, and metaphors, appeals strongly to the senses. The impression is therefore given of a gleaming fin-de-siècle void, the gleam indeed strongly related to the world of Impressionist painting, the void partly a consequence of the earlier poetry of Baudelaire and Rimbaud with its analysis of the emptiness and frustrations of modern life, and partly derived from his own experience and thought.

Added here is a new translation of Mallarmé’s free-verse poem ‘Un coup de dés jamais n’abolira le hasard’ (‘A throw of the dice will never abolish chance’). An experiment in typographical layout, the author used variable spacing to indicate voids and pauses which highlight and contrast with the elements of text. The poem contains symbolist, impressionistic, and proto-surrealist themes, the various linguistic threads being emphasized by changes in font size. The poem has influenced many later experiments in the graphic design of free verse texts.

Stéphane Mallarmé (1842-1898) was born in Paris. He was strongly affected by the early deaths of his mother, and younger sister, and later by that of his father. After learning English in London in 1862/3, he worked for most of his life as an English teacher, at first in the provinces and later in Paris. Mallarmé was relatively poor, but became noted for his literary salons on the rue de Rome, which were a centre of Parisian intellectual life, and with which he greatly influenced the literary direction of his time, through his poetry, his criticism, and his poetic theory, despite his relatively limited output. Of his two children, his son Anatole died sadly young. He himself died at Valvins, on the Seine near Fontainebleau, the location of his holiday home and retirement residence.