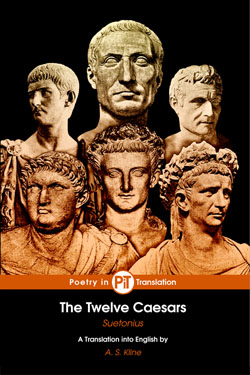 In the Twelve Caesars (De Vita Caesarum) Suetonius provides us with biographies of Julius Caesar and the eleven Roman Emperors who followed him. The work, probably written around 121AD in the reign of Hadrian, therefore covers the crucial and highly eventful period of Roman history from the end of the Republic to the reign of Domitian.

Suetonius delved into the Imperial archives to research eyewitness accounts, obtain factual information, and compile related material to produce his summary, as well as gathering anecdotal and other evidence from writers and historians of the period. The work is dramatic, and packed with incident. It provides valuable information on the heritage, personal habits, physical appearance, lives and political careers of the protagonists, and mentions details that other sources do not.

Suetonius is a major source of information on the life of Caligula, his uncle Claudius, and the heritage of Vespasian (the relevant sections of the Annals by Tacitus his contemporary being lost). Though often questioned regarding its ultimate reliability as history, the Twelve Caesars provides an unforgettable portrait of Rome under the early Emperors, and of the Emperors themselves

Suetonius (Gaius Suetonius Tranquillus) was born c. 69AD, probably in Hippo Regius in North Africa, (modern Annaba, in north-eastern Algeria), and died sometime after 122AD. His father, Suetonius Laetus, was a tribune of equestrian rank in the Thirteenth Legion Gemina. From the letters of Suetonius’ close friend Pliny the Younger, consul in 100AD, we know that he briefly practised law. Pliny helped him buy a small property and find favour with the Emperor Trajan. Suetonius later became general secretary to the Emperor Hadrian (117-138AD), and occupied a number of other important offices. He was however one of several Palace officials, including the Guards Commander, whom Hadrian later dismissed, apparently for complex reasons to do with Hadrian’s relationship with his Empress Vibia Sabina. In addition to fragments of Illustrious Writers, which include short biographies of Virgil, Horace, and Lucan, his main work extant is The Twelve Caesars.

Translated by A. S. Kline © Copyright 2010 All Rights Reserved