From Tiberius to Nero 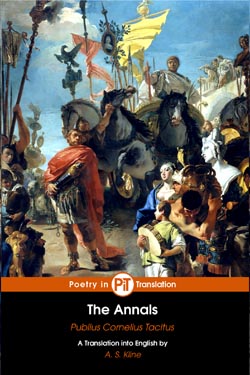 ...who indeed could be unaware of Nero’s cruelty?

What was left to him, after murdering his mother...

Annals BookII-33to54: Trouble in the East

Annals BookII-55to88: The death of Germanicus

Annals BookIII-56to76: The decline of the Senate

Annals BookIV-1to33: The rise of Sejanus, the death of Drusus

Annals BookV-1to11: The fall of Sejanus

Annals BookXII-41to69: The murder of Claudius

Annals BookXIV-1to39: The murder of Agrippina, war in Armenia and Britain

Annals BookXVI-1to35: The tale of blood

Tacitus’ Annals set out to cover the history of the Roman Empire from the death of Augustus and the accession of Tiberius to the later part of Nero’s reign. Sadly, large parts of his text are lost including his description of the whole of Caligula’s reign and the early part of that of Claudius, but what remains gives us our most detailed picture of Imperial rule. As Tacitus’ final and most mature work, the Annals exhibit his strong grasp of power politics and his lucid insight into imperial psychology. The deterioration of senatorial freedom and of the moral character of the aristocracy under Tiberius, whose reign starts well but ultimately descends into quasi-tyranny, is well-portrayed, and his detailed portrait of Tiberius is memorable. Tacitus throughout seeks to maintain an objective balance, basing his narrative on solid evidence, and documentary sources, yet also takes the opportunity to express his own views and feelings regarding the abuse of power, the corruption displayed by individuals, and the character faults which undermined Imperial rule, especially in his handling of Nero’s reign.

Publius (or Gaius) Cornelius Tacitus (c56-c120AD), was a Roman historian and senator. He studied rhetoric in Rome, and was a close friend of the younger Pliny. He married Julia Agricola, the daughter of the famous general Agricola, and later wrote a biography of his father-in-law. Entering political life under the emperor Titus, he served in the provinces and survived Domitian’s reign of terror (81-96AD), becoming suffect consul under Nerva in 97. He was active during Trajan’s reign, with significant absences from political life, as he undertook his literary work, writing the Germania and Agricola, the Histories and the Annals. In 112 or 113AD he held the civilian governorship of western Asia Minor, and died sometime around 120AD, probably surviving into Hadrian’s early reign.

Copyright © 2017 A. S. Kline, All Rights Reserved
This work MAY be FREELY reproduced, stored and transmitted, electronically or otherwise, for any non-commercial purpose. Conditions and Exceptions apply.