Poems From The Canzoniere

A selection of fifty-three poems forming an introduction to the Canzoniere.

The three hundred and sixty-six poems of the Canzoniere with, occasional, illustrated footnotes. 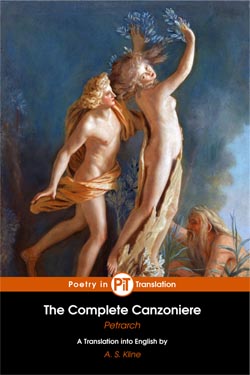 Let the beautiful laurel grow so, on the green bank,

and let him who planted it, in the sweet shade,

write lofty and joyful thoughts, to the sound of water.

Note: The sectional divisions do not occur in Petrarch's text.

Petrarch’s Canzoniere is an innovative collection of poems predominantly celebrating his idealised love for Laura, perhaps a literary invention rather than a real person, whom Petrarch allegedly first saw, in 1327, in the Church of Sainte Claire in Avignon. Mostly using the sonnet form the poems were written in the Italian vernacular rather than Latin, and Petrarch, like Dante, exploited and extended the language to convey a wider range of feeling and expression.

As well as his love for Laura, Petrarch communicates not only his own personality but also his humanist, secular and religious values, providing, like Dante, a body of work focussed, in a major way, for the first time in later European literature, on the poet himself, his individuality, and his spiritual journey, although he also looks back to the Roman achievements of Ovid, Horace, and Propertius.

The poems were written over a forty year period, the earliest dating from shortly after 1327, and the latest from around 1368, and were a major influence on the poetry of the European Renaissance, especially in France, Spain, and England, where sonnet sequences were written until well into the seventeenth century, the form being revived and extended later by the English 19th century poets.

Francesco Petrarca, or Petrarch, was born in Arezzo, Italy in 1304. A scholar, poet, diplomat, and early humanist, his rediscovery of the ancient Roman writers did much to fuel the 14th century Renaissance. His use of the sonnet form, particularly in the lyrics dedicated to his ideal love, Laura, was imitated throughout Europe, and became a mark of the civilised literary culture of his own and later periods. Initially trained as a lawyer in the universities of Montpellier and Bologna, his first extensive literary work, an epic in Latin, celebrated the Roman general Scipio Africanus. It was well received and in 1341 he was crowned in Rome as the first poet laureate since antiquity. He is particularly associated with Avignon, where he lived for many years, later travelling widely in Northern Italy, and living for a time in Venice. A friend of Boccaccio, Petrarch died at his home in Arqua, among the Eugenean hills near Padua, in 1374.