A complete English translation, with in-depth index and notes 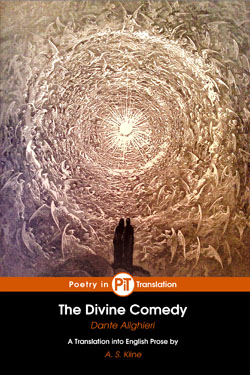 Each sub-section is an arbitrary division, typically of seven Cantos. The Text is fully hyper-linked to the index and notes and vice versa. Each Canto is arranged in paragraphs, with each paragraph headed by the corresponding line reference in the Italian text.

Cantos XXIX-XXXIII (The Empyrean, The River, The Rose, Bernard, The Virgin, The Final Vision)

The Divine Comedy is Dante's record of his visionary journey through the triple realms of Hell, Purgatory and Paradise. This, the first 'epic' of which its author is the protagonist and his individual imaginings the content, weaves together the three threads of Classical and Christian history; contemporary Medieval politics and religion; and Dante's own inner life including his love for Beatrice, to create the most complex and highly structured long poem extant.

Through the depths of Hell in the Inferno, and upwards along the mountain of Purgatory in the Purgatorio, Dante is guided by Virgil, the great poet of the Classical Roman Empire, exploring, as he does so, the political, ethical and religious issues of his time. Dante in his own life, and in this epic, represents a 'party of one', desirous of purifying the Church on the one hand, and the Holy Roman Empire on the other, yet caught between those two great worldly powers, and turning to literature to make his voice heard.

From the summit of Purgatory, Dante ascends in the Paradiso, guided by Beatrice, into the celestial Paradise, where love, truth and beauty intertwine in his great vision of the Christian revelation. Yet the Commedia is essential reading not merely for Christians, poets, and historians, but for anyone struggling with issues of morality, the ethical framework of society, and the challenge of living the true life.

Born in 1265 in Florence, from which he was banished in 1302, dying in Ravenna in 1321, Dante set the Divine Comedy in the year 1300, when he was thirty-five years old and 'in the middle of our mortal life'. The setting allows him to utilise the past symbolically, exploit the present politically, and anticipate the future in simulated prophecy.

The Commedia throughout reflects his love for 'Beatrice' whom he first saw at a young age in a church in Florence, and who came to represent for him Intellectual and Spiritual Beauty. The story of his love for her, her early death, and his inspiration to write the Commedia are told in his prose work La vita nuova, The New Life, of 1294.

While never returning to Florence after his banishment, the city remained a crucial focus of his thoughts and memories, and while eating the 'bitter bread' of exile his meditations on that city, on Beatrice, and on the moral challenges of his age, led as he had promised in The New Life, to this great work, of explanation, aspiration, and ultimately spiritual exaltation.

Meditations on the Divine Comedy of Dante Alighieri, by A. S. Kline

In these meditations on Dante's Divine Comedy the author provides a companion volume to his translation of the great work itself, guiding the reader step by step through the complexities of the Commedia. Aimed not just at the student but also at those who, impressed by its poetry and beauty, simply wish to delve deeper into the meaning and structure of the work, it brings together concepts, factual information, and careful interpretation, to highlight the ideas Dante pursued in creating his masterpiece.

The Meditations focus on Dante's role as poet, individual, and ethical thinker, rather than on his religious or doctrinal significance to Christian readers. This neutral stance allows consideration of Dante’s significance to the secular as well as the Christian world, stressing his continuing importance to both. 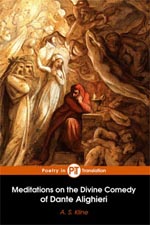