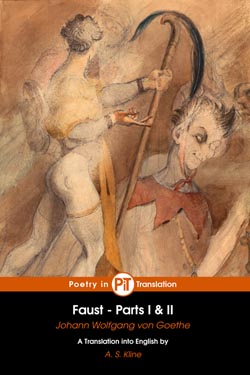 Goethe’s two-part dramatic work, Faust, based on a traditional theme, and finally completed in 1831, is an exploration of that restless intellectual and emotional urge which found its fullest expression in the European Romantic movement, to which Goethe was an early and major contributor. Part I of the work outlines a pact Faust makes with the devil, Mephistopheles, and encompasses the tragedy of Gretchen, whom Faust seduces. Part II, developed over a long period of Goethe’s later life, reflects Goethe’s own transition from a predominantly Romantic to a wider world-view and explores more extensive themes, including the values of the Classical past, as it moves towards the work’s resolution.

The protagonist, Faust, is presented in a complex manner, and Goethe’s treatment of the subject matter raises ethical and spiritual issues, many of which are not resolved within the drama itself. Goethe’s stress is on Faust’s striving towards the good, and on the nature of human error, rather than on the traditional Christian view of sin and redemption, and the play’s opening sections and its conclusion can be seen as humanist allegory or metaphor rather than an expression of orthodox religious belief. It is left to the reader to draw their own conclusion about Faust’s everyman character, and the extent to which he earns his ultimate spiritual salvation.

The play had an enormous influence on later German thought and literature, and together with his lyric poetry has ensured Goethe’s place among the great European writers.

Johann Wolfgang von Goethe was born in Frankfurt am Main in 1749. In 1774 he published his first major work, the self-revelatory novel The Sorrows of Young Werther, in which he created the prototype of the Romantic hero, and instigated a European fashion. He consequently became a leading figure in the Sturm und Drang movement, which celebrated a Promethean restlessness of spirit as opposed to the rationalism of the Enlightenment. Later, in the service of Duke Karl August at Weimar, Goethe took on a wide variety of social and cultural roles and, with his journey to Italy in 1786-88, turned extensively to Classical art and thought as a means of achieving greater personal balance and perspective. He also developed a range of scientific interests, for example plant biology and the theory of colour. His later literary achievements include the drama of Faust, and a wealth of shorter poems and lyrics embodying his mature philosophy. Goethe died in Weimar in 1832.

The Restless Spirit - A Scene by Scene Study of Goethe’s Faust, by A. S. Kline

A detailed analysis of, Goethe’s Faust Parts I and II, which considers the Romantic background of Part I, the move towards Classicism in Part II, and the moral and spiritual issues which Goethe raises throughout the work. The reader who wishes to progress beyond a simple contemplation of the tragedy of Gretchen in Part I is presented here with a detailed discussion of Faust’s Romantic beginnings and later progress towards potential fulfilment, through his intricate pact with Mephistopheles and its dramatic outcome. 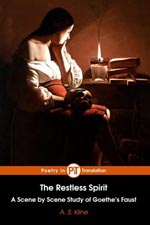 Translated by A. S. Kline © Copyright 2003 All Rights Reserved